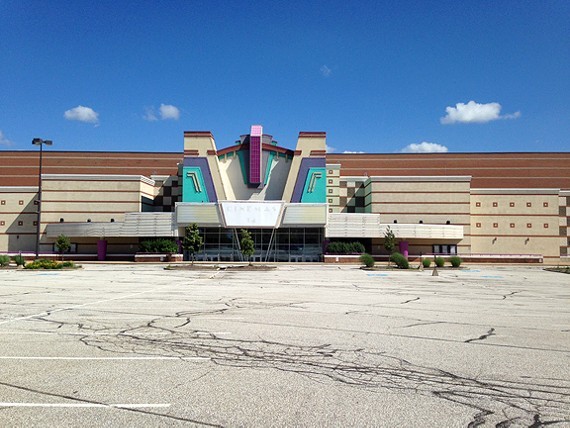 Cleveland Heights issued an RFP with an eye toward halting the long, slow decline of Severance Town Center. The complex, opened in 1963 as the state's first indoor mall, was shuffled and reformed in the 1990s into what it looks like today, which is a few main tenants and a lot of vacancy.

When Walmart departed six years ago for a spot literally down the road, it created a 120,000 square foot chasm that trigged foreclosure and other problems, financial and otherwise.

"A mall like Severance has a choice when found at a competitive disadvantage — either it's got to grow and stay with the same basic format, or it has to morph, change into a different format, or it's going to die," Roby Simons, a professor at the Levin College of Urban Affairs at Cleveland State University, told Scene four years ago. "Unless you replace Walmart with a tenant of the same stature — and there's a short list there — odds are it's not going to remain the same format."

That's exactly what Cleveland Heights, which doesn't own the land, is hoping to create in working with the owners.

“It’s time to really think about returning vibrancy to Severance," City Manager Tanisha Briley told Cleveland 19. “Marshalls, Daves, Home Depot, Office Max they are very strong tenants and they add a lot for our community and I know our residents and our surrounding communities rely on those stores but that’s not all Severance can be. We need to look at a mix of uses. We think there’s an opportunity for Severance to be an economic engine for our community as well as provide some new housing options, recreational activities. This is our largest business site in the city."

Which sounds a lot like what everyone's been saying for years, and which Cleveland Heights sees in its neighbor with the Van Aken district.

Colette Gibbons, court-appointed receiver of Severance and an attorney with the law firm Ice Miller LLC, says that a new vision for the shopping center is needed before desirable tenants will venture in. "High-end tenants and nicer restaurants are not going to make a move unless there's an overall plan for the center," she says.

"I think it has to be re-envisioned," she continues. "It's too big right now, and it's not updated the way a lot of the lifestyle shopping centers are. It doesn't have the amenities, like coffee shops, restaurants, green space and areas for kids to play. The people of Cleveland Heights would like a facility like this where they could head over on a Sunday and hang out for a couple of hours. They would like a nice development in the center part of their city."

Here's to hoping they finally figure it out.