What Cities Have the Most Renters Looking to Move to Cleveland and Vice Versa? Both Lists Start With Akron and Detroit

June 28, 2019 at 7:31 AM
3 comments
If you rent an apartment in Akron or Detroit and you're looking to move, chances are good you might be looking to land in Cleveland. And, somehow, the exact opposite is also true.

That's according to Apartment Lists's latest Renter Migration Report, which tracks and ranks apartment searches on the site — both inbound and outbound — across metro regions.

Here's the top metros with inbound searches for the Best Location in the Nation (TM).

The top inbound searches overall across the country: 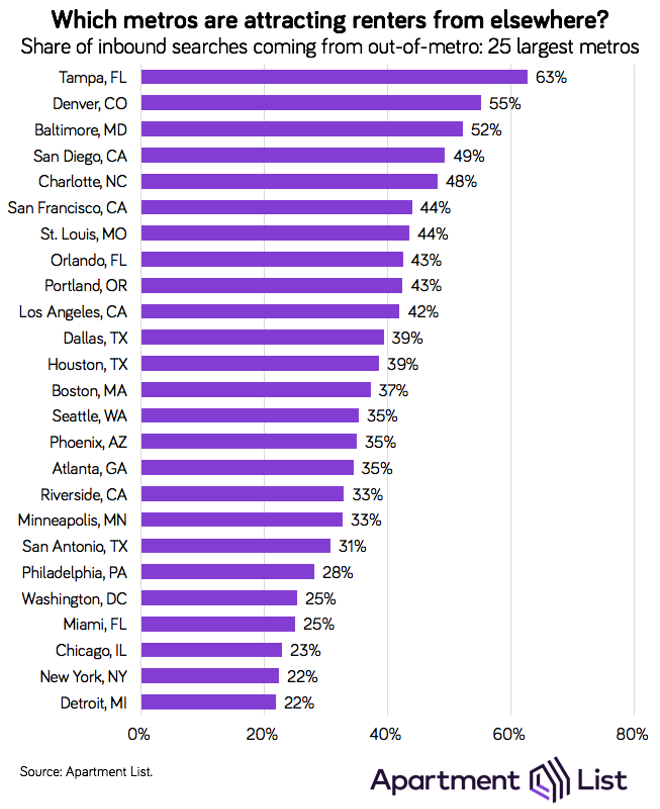 While there are obvious problems with the study — a single source, excluding homeowners, etc. — City Lab points out that despite those holes, and despite the fact the list highlights top cities that are different than those identified in the federal migration report, there's value here because the data focuses on a young, mobile population.

According Chris Salviati, a housing economist at Apartment List, the data reflects millions of individuals who’ve poked around the site. “Among our registered user base, the demographics skew younger, higher-income, and more female than the overall population,” he said via email. But this analysis included unregistered users, too, who Salviati believes is more representative of the renter population at large.