Local car dealer turned tech entrepreneur Bernie Moreno has announced that "City Block," the Blockland tech hub conceived to attract and grow start-up companies in Cleveland, will open at Tower City as early as next year.

The development project will be a joint effort between Blockland and Bedrock Detroit, the Dan Gilbert real estate company that owns and operates The Avenue Shops at Tower City.

Bedrock Chairman Jim Ketai released a statement saying that his company, which has studied multiple ways to adapt the depleted Tower City mall since it acquired the property in 2016, has "entered into negotiations" with the Blockland community.

"This vision is for City Block to soon occupy a substantial portion of The Avenue Shops at Tower City Center," Ketai wrote, "bringing together corporations, technology start-ups, venture capitalists and the broader community in a world-class entrepreneurial center."

In a presentation to Cuyahoga County Council Monday, Bernie Moreno said that it took six to seven months to get Bedrock on board with the City Block vision, but now the company was "fully engaged" and prepared to move forward with concrete plans.

An FAQ released by Blockland for a Monday afternoon community meeting said that City Block would be a 350,000 square foot entrepreneurial center which would transform the heart of the city into "a buzzing cross-section of entrepreneurs and services."

Potential tenants, including start-ups, students, venture capitalists and service providers, would be able to locate at City Block "early next year."

Significant construction will need to take place, however, if the new facility is to live up to Blockland leaders' vision. Conceptual renderings — which Moreno stressed to County Council were "very early" "highly conceptual" and "aspirational" — depict a dramatic physical transformation of West Prospect Avenue.

Local blogger Ken Prendergast, having spoken with someone familiar with the project, reported that Bedrock would likely remove all of the retail from the lower mall and "instead line both sides of Prospect Avenue through the Tower City complex with storefronts, possibly retail spaces for technology companies like Apple, Microsoft or similar examples." The significant square footage, Prendergast wrote, would give City Block ample room to build "Genesis," a tech-focused K-12 school that Moreno has long envisioned and which may or may not still be part of the hub's plans.

No cost estimates for the project have been published, but Moreno estimated in the past that the redevelopment would cost somewhere in the neighborhood of $150 million. Vocon Partners has been retained by Bedrock for the project. Moreno told council that his presentation was "purely informational," and there was no public financial ask at the current juncture.

In addition to the City Block news, Moreno announced a more focused strategic direction for the Blockland initiative, what Moreno called "Blockland 2.0." He said that Blockland would be ceding much of its previous organizational legwork to a new collaborative effort between The Cleveland Foundation, The Fund for our Economic Future, the Greater Cleveland Partnership, Team NEO and JumpStart. That effort, called the “Cleveland Innovation Project,” will work to “stimulate innovation and drive inclusive economic growth.”

The upshot is that the former Blockland "nodes" (subcommittees) will be significantly whittled down. “Blockland will step aside” wrote Moreno in a community letter, “and will instead now sharpen our focus and redouble our efforts on [the place, thought leadership and engagement nodes.]”

That means Blockland will focus primarily on its flagship conference — Blockland Solutions 2 is scheduled for Dec. 8-11, 2019 — and attracting tech talent to City Block and the region.

Moreno emphasized, as he has in the past, that the engagement node, itself an outgrowth of the "Next Gen" (young professional) node, will have to be deliberate about reaching out to communities across the demographic spectrum and “fostering a community where all stakeholders are intentionally included.”

Here are some of the early conceptual renderings: 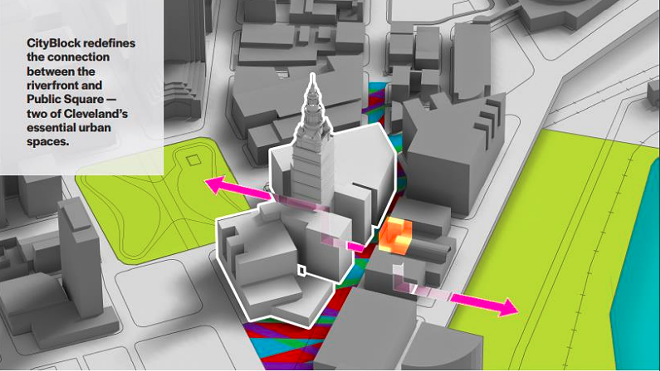