In the Midst of a Massive Summer Tour, New Orleans-Based Soul Rebels Come to the Beachland Next Week 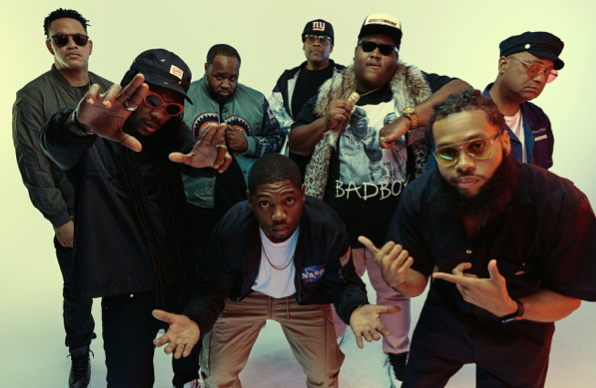 The Soul Rebels originated when percussionists Lumar LeBlanc and Derrick Moss began playing with members of the Young Olympia Brass Band. They didn’t have a name, so Cyril Neville gave them one when they opened for him one night at Tipitina’s. They put out their first album in 1995 and have relentlessly toured ever since.

Their latest effort, 2012’s Unlock Your Mind, capably draws from soul and jazz as songs such as “504” pair soulful vocals with vibrant horn arrangements. The album also includes a rendition of the Eurythmics tune "Sweet Dreams" that really swings.

During a recent conference call, trumpet player Marcus Hubbard and drummer Lumar LeBlanc, who bring the band to the Beachland Ballroom with Parker Louis at 8 p.m. on Thursday, July 18, talked about the current tour and the band's musical evolution.

Talk about your respective musical backgrounds.
Hubbard: Being from New Orleans, music has always been around me. You have no choice but to gravitate to it. When I was a kid at 5 and 6, I enjoyed the music and then picked up a trumpet in fifth grade. My brother played before me. He didn’t feel that much love for it. I just picked it up one day and a note came out. I was hooked form that very first time. I just picked it up from there. In New Orleans, the marching band is really big. We’re like the superstars in New Orleans. In every other city, it might be the guy who played on the football team, but in New Orleans, we are the superstars.
LeBlanc: I started at a young age. I played in an African-themed play. They had us dressed up like African guards, and they selected a few kids to play bongos. I was one of the ones they selected. When I played on it, something just clicked. I never put it down. I played in elementary school. It was very structural. We were trained by the nuns. They were so strict, they didn’t want us to not be in activities. You had to be an altar boy or in a band. I chose the band. I went to Texas Southern on a scholarship, but I didn’t major in music. I majored in social work. I did that as long as I could. When I came home from college in 1990, friends of mine were in a brass band here in New Orleans. I started playing with the Young Olympia Brass Band and eventually formed the Soul Rebels.

Shortly after forming, you guys became the house band at a New Orleans club where I think you still perform when you’re not on the road. Talk about how you first started there and what the experience has been like.
LeBlanc: We’ve been the house band at a lot of clubs. Le Bon Temps Roule is our home and has been our home before Hurricane Katrina. We just went to the club and asked the owner to give us a chance. You can find music anywhere seven days a week in New Orleans almost 24 hours a day. It’s not uncommon for bars and clubs that might not even have a stage to have music.
Hubbard: We started on a Wednesday but then we also did Thursday.
LeBlanc: That wasn’t the first [residency]. At one point, we were playing five to six clubs a week. That doesn’t even include the house party or birthday party or weddings or funerals or corporate events. We were just trying to break through and play wherever we could. Our passion was so strong. We had gigs where we called them handshake gigs. You played a gig and then you shook hands with your band members and went home. We just knew we had to go through that. We knew we wouldn’t just walk on the scene. Trombone Shorty’s mom gave us a gig at her club, and she was the first one, and I always give her props.

I enjoyed watching Treme when it was on. What was it like for you guys to be involved with the show?
Hubbard: It was cool. It was the first show that we felt like had done its homework. They did their homework and connected with the locals. It got the authenticity of the city and showed what it was like post-Katrina.

For the summer tour you’re currently on, you’re performing with everyone from Wu-Tang Clan to the Rolling Stones. Talk a bit about what it’s like to play with groups from so many different genres.
LeBlanc: Oh, man. I love the Wu-Tang. That’s one of my favorite groups along with the Doors. To play with someone you admired for so long is an honor. It’s a testament to the Soul Rebels, and it speaks to the musicality of these eight members. They can play with anyone from Katy Perry to the Wu-Tang to Metallica and Rakim. There’s no limit. It’s amazing how much music we’ve consumed. That was always our dream from Day One. You know how dreams go. Sometimes, you have them, and they never come true. We study music everyday. It’s not just about who can play the best. We study it every day. It’s in our DNA. We’re constantly digesting different musical forms.
Hubbard: We have a band that listens to all kind of music. You know there are musicians who stick to their particular style they want to stick to. We come from the mindset that it’s music. We enjoy the challenge of different genres. We learn their approaches to creating songs, and we can talk to the different artists. It helps us with our creative process. It’s an honor to play with people you’ve looked up to. We played with Rakim, the first rapper I fell in love with. It’s our third or fourth time we’ve played with him. It’s great to talk to musicians who have different approaches to music. You find out the similarities even though the genres are so different. The journey is often similar. In this industry, man, you might want stuff to happen fast, but it often doesn’t happen as fast as you want it to happen.

You’ve refined the live show over the years. Talk about how it’s evolved.
LeBlanc: It’s a lot of work, but it’s beautiful. It used to be from the gut with no song list. It’s now a very structured organized professional machine. It encompasses a whole lot of musicality. We use inner ear monitors and tracks. We’ve always had singing and vocals. That’s not anything new but it is new in terms of using the electronics we have at our disposal. It’s much more choreographed. It’s a real in-depth experience. We have some visuals too that show different Soul Rebels images. The show is comparative to that of any five-star artist you want to see. You have to evolve and should never feel satisfied. I’m sure other things we haven’t envisioned yet are going to come along.
Hubbard: A lot of is from collaborations. It’s like if you play with Michael Jordan, and you see how he perfects his game. With our favorite artists, we can get behind the scenes and see how those shows are put together. It’s uncharted territory for a brass band from New Orleans. We’re always trying to expand and find different things to do with our instrumentation. It keeps it fun for us. It’s a learning process with a lot of bumps and bruises. You have to have a group of guys willing to take the bumps and bruises and realize there’s a light at the end of the tunnel. It’s like seeing the forest through the trees. We’re willing to go through whatever it takes to get there.