Just over 30 years ago, the four original members of Blues Traveler, who have known each other since their early teens, gathered in the basement of their drummer’s parents’ Princeton, home and launched a jam band that has now recorded a total of 13 studio albums, four of which have gone gold, three platinum and one six-times platinum.

Thirty years into its career, the jam band moe. has delivered 11 studio albums and a slew of live releases under its belt. The band has shared the stage with a wide range of acts, including Allman Brothers, the Who and Robert Plant.

For the first time ever, the two bands have embarked on a co-headlining tour. They bring the show to Jacobs Pavilion at Nautica on Saturday, July 27. G. Love opens. 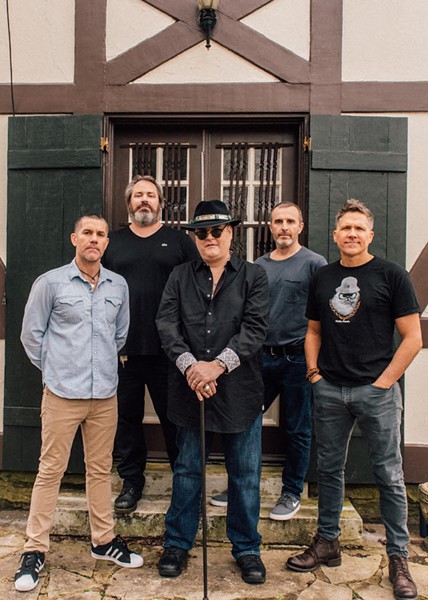 Talk about how this tour came about.
Garvey: We had talked about doing something like this rather than touring on our own. It’s good to put together a package and tour. We’ve done it in the past. It’s not easy because lots of bands like to play festivals and split their time between their own shows and bigger events. One thing with Blues Traveler and us is that we followed in their footsteps. We were a couple of years later than them. We're more of a jam band but of the same era. It seemed like a good match, and we played a couple of shows with them before. We played in Philadelphia a couple of times, and [Blues Traveler frontman] John [Popper] came in and sat in. He sat in for the whole set. He stays up on stage with us. He’s an intuitive musician. It’s fun to meet people like that and play with someone who plays a completely different instrument. After that experience, we knew it would work with the two bands.
Kinchla: I believe the powers that be put it together. We played with moe. about four years ago at Red Rocks. It was a good show and vibe all around. Timing-wise, they happened to be heading out at the same time. Our managers have been trying to coordinate this for a couple of years, but it’s hard because bands have their own cycles. G. Love was available, so that was a no brainer to throw him in there. It’s been really fun thus far. We’re six gigs in.

How do the acts complement each other?
Garvey: We have a collaborative set that’s about 45 minutes long. The songs change. We’ll have slight variations each day. We’ve only played a couple of shows so far, and we have a list of other songs we haven’t yet gotten to, so we have other stuff to try out. We start with John [Popper] and Ben [Wilson] and they’ll play with Al [Schnier] and Jim [Loughlin], who is on vibraphone. They’ll play a song with no drums, and then, we’ll add people and people will come off. G. Love does a couple of songs too.
Kinchla: It’s worked out great. G. Love opens. We play the middle set. Our gear stays on. We have an ongoing and growing set list of some covers and some moe. songs and Blues Traveler’s songs that we’re doing. It’s been really cool. There are a bunch of different dudes who can sing. We’re all very laid-back. It’s made for some comedic moments. The other night, we had an ending from Spinal Tap that we inserted in “I Want You to Want Me” but we forgot to tell the guys from moe. and we went into “Hellhole” and we were like, “Oh yeah. We forgot to tell you.”

What was the jam band scene like when you first started out?
Garvey: The term hadn’t been coined yet but there was this scene of people following in the footsteps of the Grateful Dead and the Allman Brothers and various jazz artists. We were an oddball band. You try to find your niche. We were lucky in that we could fit into a couple of different scenes. We could play at a variety of venues. Some venues were more punk venues. We were booking our own shows. Al would call places up and say he had a band and would send them music. That was when we first started touring regionally. It was a lot of hard work. We tried to work constantly. That helped the band get better and develop a fan base, and people started talking about us.
Kinchla: There was a really vibrant scene in New York. We all grew up in Princeton and played in high school. We moved to New York out of high school. At the time, there was a different vibe. Now, there are so many bands. People go to see a specific band. Back then, on Thursday night, you could go to [the now defunct New York club] Wetlands and Wednesday would be some other place and Sunday night there would be a happy hour. That vibe doesn’t exist as much. Wetlands fostered in all the bands. Phish and Dave Matthews and everyone played there. It was a really cool scene to be in but the mediums changed so much. It’s almost impossible to recreate that kind of scene. There weren’t cell phones back then. You’d show up at 9 just because you said you would. There was no other way to get in touch with people.

How’d you learn to improvise?
Garvey: It developed over time. When we first started playing, we were playing a mix of music. We liked bands like Fishbone and Primus and Frank Zappa and Steely Dan. We’d sometimes play shorter songs and sometimes songs with more extended solos or composed stuff. Then, we realized some nights we would have to be on stage for two or three hours playing two sets. We’d have to fill that time line. We started making segues between songs and putting covers within our songs and trying to do weird stuff like that. It was a mix of improvising and rearranging our songs and sets to accommodate those long nights. It turned out to be much more fun. It was something that got developed as we went. In the fall of '94, we quit our day jobs and started doing it full time but there was a lot of road work, and the improvisation was developed during that time. Since then, we found a variety of ways to butcher our own songs and butcher other people’s songs. It’s always been a quest of trying to touch on as many stylistic elements as we can within a song or within a set.
Kinchla: A lot of it was based on Allman Brothers and Grateful Dead and how they switched it up and their live versions would be ten minutes. It was kind of a throwback. Every 20 years, it seems like there’s a throwback to that era. It shifts every ten years. The pop synth stuff is now back with the original synthesizers and basic sounds. You have the ability to create complex and multitimbral things, but you have people trying to buy dated synthesizers.

Did you try to expand your sonic range on your latest album?
Garvey: We’re not trying to show off, but it comes from the fact that we have multiple songwriters and everyone has a variety of likes. It’s not a conscious effort. We realized a long time ago that it’s good not to try. Trying for a specific goal in some regards was less rewarding than just wanting to please ourselves. In doing that, the band is happy, and hopefully, the people listening are happy. The result might be unique or exciting for us, and hopefully, that translates. Every time we go into the studio, we try to pick our favorite songs from the new batch of stuff we’re working on and make a cohesive album but we’re just trying to please ourselves as songwriters. We go through phases of rediscovering certain kinds of music or you finally follow something you love and follow its path backward and realize how it’s connected to European music or the blues or jazz. If you’re lucky as a musician, you’re able to continually find new things that are inspiring. Otherwise, you’re just doing the same thing. It’s like a bad desk job.
Kinchla: It’s just what happens when we make a record. It’s a very diplomatic process. John [Popper] will put a different melody in that will change how we play a song. Each of us will have five ideas and try to get them down from a person. I think what happens is that we have varied taste, and we produce songs that sound very different. Umphrey’s McGee and moe. will jam on their albums. We made an effort to record concise songs for the albums. It’s a different process when we play live.

What’s kept the band going for thirtysomething years?
Garvey: One of the top factors is that we have this friendship and family vibe in our organization and it’s gotten us through a lot. It’s been a strong factor in our general mental health and being inspired to do everything else in life and all of us have been fortunate to have good family support. Our private lives and working lives have been a mix of all that. Improvising every night keeps things fresh. It’s terrifying and rewarding. There’s some push and pull sometimes, and that’s exciting. There are failures but the rewards are greater when everything is clicking, and that happens most of the time. We’re able to have a groupthink and go somewhere new. It’s like having a conversation with your friends. You let everyone speak and contribute, and at the end of the night, you come to a good conclusion and have a good laugh about it. It’s that kind of dynamic. We don’t repeat the same songs every night. That also helps.
Kinchla: When you change shows up, you give people the incentive to come to other shows. We were lucky enough to be around and learn from that. We started drawing fans early. Now, we can still tour, and they come out, and there’s a new generation of kids, and their kids are starting to come out. We hit the scene at a great time to build a band touring. To do that is the anti-thesis of an artist today. They come out, and they’re huge and then you forget their name two years later because there’s not a built-in crowd or a history of playing. Being consistent and loyal to your fans and playing every single year builds the band up over time, and it becomes sustainable.