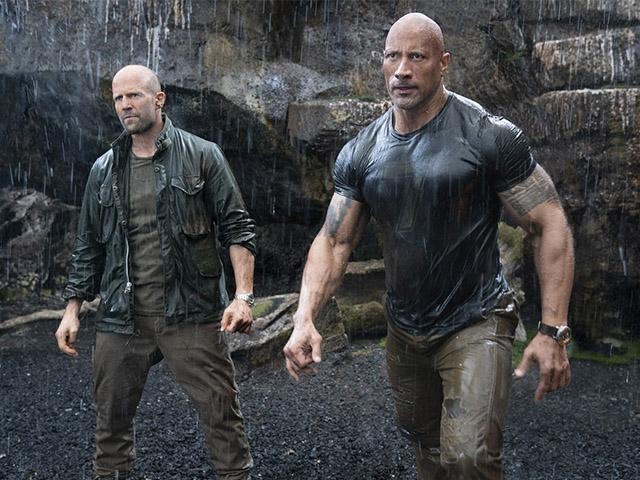 Much like the franchise off from which it spun, Hobbs & Shaw — the official title of which may actually be "Fast & Furious Presents: Hobbs & Shaw" — has about as much nuance and depth as an episode of Barney. The various morals and lessons it imparts are simple, yet powerful: Family comes first! Forgiveness is tough! But it's better than holding a grudge! If you treat them with kindness and respect, villains can (and routinely do) become heroes!

There's a moment in Hobbs & Shaw, where Luke Hobbs (Dwayne Johnson) and Deckard Shaw (Jason Statham) are going toe-to-toe with the robotically enhanced superhenchman Brixton (Idris Elba), and it dawns on them that by working together, they'll stand a better chance of defeating him than by taking him on one at a time. It's literally how you might dramatize "cooperation" to a child. One of them actually says, "What if we work together?" This is abundantly obvious and basic — stupidly so — and the immediate efficacy of the strategy reflects rather poorly on the sophistication of Brixton's engineering.

And yet, you can't help smiling along, (cheering, in my case), as Hobbs and Shaw each start taking vicious punches so that the other might land blows against their adversary. These are two bickering alpha males who prefer to fly solo and who have loved to hate each other since Deckard Shaw's explosive introduction in Furious 7. But even they are not exempted from the earnest teachings of Fast & Furious: Teamwork, for example, always makes the dream work.

From start to finish, the action sequences here are the outrageous, over-the-top spectacles that audiences have come to expect from the franchise, including a landmark sequence on the island of Samoa in the film's final act. The jokes are comfily PG-13: "I'm gonna stick my foot so far up your butt," Hobbs tells Shaw, in a prototypical exchange, "that you'll be eating shoelaces for weeks."

To boot, there are splendid cameos!

The F&F films since 2011's Fast Five have all focused on the convening of a team — the team, led by Dom Toretto (Vin Diesel) — for some impossible mission or heist. Unlike those in the Mission: Impossible franchise, the F&F missions have generally had something to do with cars. Or, at any rate, being good at driving was generally an advantage, if not a prerequisite, for pulling off the jobs.

Here, the plot is not car-centric or even car-adjacent. Neither Hobbs, the famed federal agent and tracker; nor Shaw, the rogue British soldier, got his start street racing. (Though to be fair, Jason Statham will forever be the Transporter. The driving bona fides of the actor happily translate in this case. He shifts gears in that McLaren oh so deftly in an early chase!) But the gist is that Hobbs and Shaw are brought together to recover a dangerous virus, which happens to have been implanted in the body of a British intelligence officer ... who happens to be Shaw's sister, (Vanessa Kirby)! WHAT!!!!

Brixton and his minions are attempting to acquire the virus as well, to do some garden-variety terrorism at the behest of a faceless supervillain, the identity of whom will no doubt be revealed in a subsequent film. Idris Elba is solid as the bad guy, but doesn't get the screentime to do much more than pant and wink and growl and occasionally goad.

This film is Johnson and Statham's. They are veteran action stars with huge personalities — Statham turned in one of the finer supporting comedic performances of the century in Spy — and their physical gags simply do not get old, as when Shaw creates new identities for them (in something like 30 seconds) so that they can fly commercial, and Hobbs appears in an extremely tight beige velour suit and beret. The audience, at my advance screening, was rolling.

Gosh, what a good-natured franchise! Go see Hobbs & Shaw, folks. Bring whoever you like! Show me someone who doesn't enjoy Fast & Furious and I'll show you a hater of humankind.

Fast & Furious Presents: Hobbs & Shaw is not showing in any theaters in the area.