Ohio's Newsrooms Will Continue to Suffer and Die Without Public Support 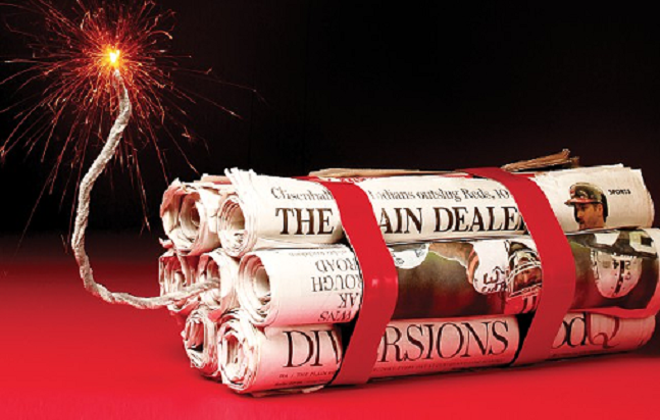 When the Youngstown Vindicator closes its doors for good at the end of the month, Youngstown will gain the unwanted distinction of being the largest city in the country without a newspaper.

But it'll be right at home in Ohio, where more than 100 newspapers have shuttered since 2004, and where papers in two of the state's four largest cities (Cleveland and Toledo) no longer offer daily home delivery.

The catastrophic state of the news industry was the subject of a report — "Breaking News: Newspaper closures hurt Ohio communities" — published recently by Policy Matters Ohio.

It described in detail the dramatic decline of newsroom jobs and the concomitant effects on statewide news coverage and democratic participation.

The numbers are striking.

That decline has been especially significant in recent years among staffers who gather and write the news. Currently, there are only 810 reporters and correspondents in the state. That's a decline of nearly 40 percent (from a total of 1,300) since 2012. Moreover, the report noted that journalists tend to be poorly compensated — it referenced one starting salary for a current reporter job posting in Ohio: $22,880 per year — and that low wages make it difficult for struggling publications to attract and retain newsroom staff.

The report was not merely a sobfest. It included policy recommendations as well: things like increasing state investment in news and creating a state body to explore methods for newsroom innovation.

At the federal level, the report advocated supporting legislation that would more easily allow news corporations to become nonprofits. And it echoed research which has proposed a tax on the profits of tech giants like Google and Facebook, companies that have siphoned away much of newspapers' traditional advertising revenue.

Tax dollars on these "digital behemoths" could be put toward a Public Interest Media Endowment or a journalism trust fund, the study said.

"Ironically, Ohio has provided tax breaks worth tens of millions of dollars to these [digital behemoths] in the form of sales-tax exemptions for new data centers, though they employ relatively few workers," the report said. "New subsidies like these should not be provided."

The full report is available here.