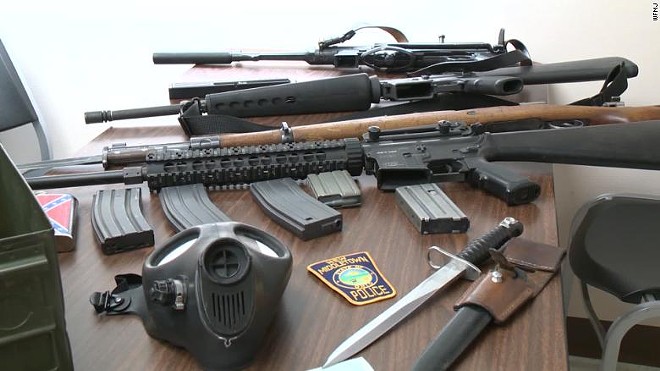 A 20-year-old man was arrested this weekend in Youngstown after posting an image to his Instagram account of a man firing a gun, and tagging the local Jewish Community Center.

James Patrick Reardon was booked into the Mahoning County Jail on Saturday and is being held on a $250,000 bond. Reardon’s social media accounts were found to be rife with images of guns and anti-Semitic content.

Police in New Middletown, Ohio, (about 13 miles South of Youngstown), executed a search warrant at Reardon’s home Friday night, where they found a cache of weapons and ammunition.

Reporter Graig Graziosi, in a piece about Reardon for the Youngstown Vindicator, wrote that among Reardon’s guns was an MP-40, a German submachine gun used by Nazis during WWII, which Reardon would have likely encountered playing video games. Graziosi hinted that Reardon probably bought the gun because of his allegiance to Nazi ideology.

“Sometime between 2015 and 2017,” Graziosi wrote, “Reardon’s ideology evolved. It began with Trump and local Republicans … and morphed into something darker. By that point, as people who knew Reardon in high school tell me, he’d already earned the nickname ‘Little Hitler.’”

Reardon is not the first young white nationalist to have been arrested in the Mahoning Valley recently. Last week, 18-year-old Justin Olsen, of Boardman, was arrested after advocating shooting “every federal agent on sight,” and citing the Oklahoma City Bombing as a valid and effective example of political action.

Olsen was arrested three days after the mass shooting in Dayton, six months into an investigation by local police. Cleveland.com reported this weekend that at Olsen’s hearing, his mother testified that while Olsen had become increasingly rude to her recently, she never expected him to carry out a violent act. Law enforcement, on the other hand, believed Olsen was planning a terrorist attack.

“To say that [Reardon and Olsen] are just crazy may give people some comfort that they’re simply anomalies,” Graziosi wrote in his Reardon piece, “but they aren’t. They’re products of online radicalization. And there are plenty more out there. The larger danger is the belief that there are just two young people in the Valley who hold views that express radical ideology.”