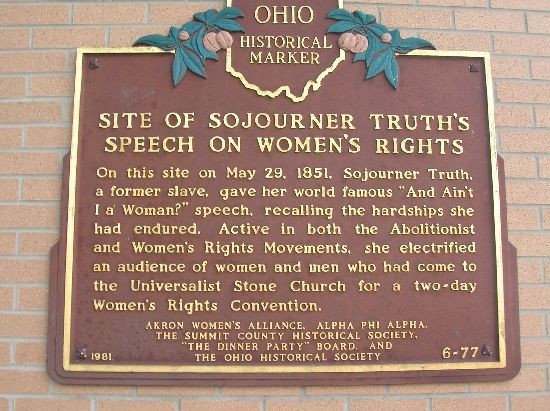 COLUMBUS, Ohio - It's been 99 years since American women gained the right to vote - a milestone achieved thanks in part to the dedication of many Ohioans.

Women's Equality Day is celebrated on Aug. 26 each year to commemorate the adoption of the 19th Amendment to the United States Constitution in 1920.

Megan Wood, director of cultural resources with Ohio History Connection, explains the fight for women's suffrage began long before then, most notably with the 1848 Seneca Falls Convention in New York.

She says there also was a lot of early suffrage activity in Ohio, including two women's rights conventions.

"The 1851 convention takes place in Akron, where Sojourner Truth gives her famous 'Ain't I a Woman' speech," Wood relates. "And in the early 20th century, you have people like Harriet Taylor Upton, helping to lead the National American Women Suffrage Association, and she headquarters that organization out of Warren."

Ohio ratified the 19th Amendment shortly after it was approved by Congress.

Wood says suffragettes from Ohio then traveled to other states to advocate for its passage, and some of them were present when it was ratified in Tennessee, the final state needed for adoption.

Wood notes there is a lot of excitement for the 2020 Women's Vote Centennial Initiative, which she says comes as women continue to fight for equality.

"We celebrate this landmark in a moment where women running for office and women's issues are really at the forefront of politics," she points out. "This centennial gives us all an opportunity to appreciate the past but see how it helps us move forward in the future."

Gov. Mike DeWine signed a bill in April to create The Women's Suffrage Centennial Commission, which will hold events and raise awareness about the 70-year struggle leading up to passage of the 19th Amendment.

This story was produced in association with Media in the Public Interest and funded in part by The George Gund Foundation.