Mushroomhead's Annual Halloween Show To Take Place on Nov. 1 at the Agora 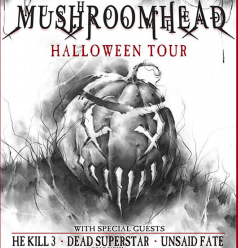 When the local metal act Mushroomhead first formed in 1993, few critics imagined the group would still be going at it in 2014. And yet the masked band continues to be popular.

Recorded at the band's studio in North Royalton and mixed by long-time collaborator Bill Korecky, the band's most recent album, 2014's The Righteous & the Butterfly, is arguably its most polished effort to date, and the group has been busy recording a new album that’s due out next year.

The band has just announced that it’ll bring its annual Halloween show to the Agora on Nov. 1. He Kill 3, Dead Superstar and Unsaid Fate share the bill.

Tickets are currently on sale.