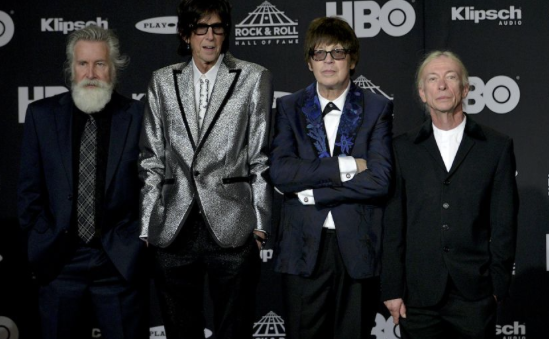 Various news outlets have reported that Ric Ocasek, the singer of Rock Hall Inductees the Cars, has died at age 75.

The band’s long overdue induction into the Rock Hall took place last year, and Brandon Flowers of the Killers did the honors. “They turned my black and white town into color,” he said before kneeling to hand the band their award as they walked to the stage.

The Boston band has a serious Cleveland connection — late bassist Benjamin Orr hailed from Northeast Ohio. During the Rock Hall Inductions, Cars members all acknowledged his contribution to the group, and singer Ric Ocasek even spoke about living in Cleveland for a short time, something which received an enthusiastic response from the capacity crowd at Public Hall. “It’s quite strange to be here without him,” Ocasek said in reference to Orr.

The band’s performance included flawless rendition of hits such as “My Best Friend’s Girl,” “You Might Think,” “Moving in Stereo” and “Just What I Needed.”

The Cars broke up in the late '80s but Ocasek continued to work as a producer for acts such as Weezer, Guided by Voices and Bad Brains.

Two years ago, Rhino Records reissued a live album that captured a 1978 performance at the Agora that was broadcast live on WMMS.

The Rock Hall issued the following statement: “Ric Ocasek’s hook-savvy songwriting and stylish, modern vocals for the Cars fused garage punk, pop and avant-rock to create a brash new wave sound that sparked a decade of rock classics. His later work as a producer drew on his innovative spirit and endeared him to new generations of musicians and fans.”

The Rock Hall currently has Dean Zelinsky’s "Dean" electric guitar played by Ocasek and a black/dark brown, short, leather motorcycle style jacket with black fringe and silver metal studs worn by Ocasek, possibly during the Door to Door tour in 1987, on display. Studs on the collar spell out "LOVE" on left and "HATE" on right.