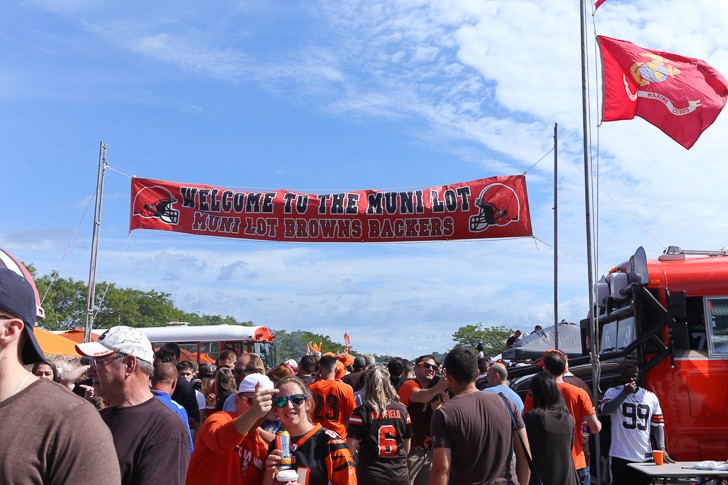 We'll see how this one goes.

The city of Cleveland announced in a brief press conference today that the Muni Lot will once again open 6 hours before kickoff for Sunday's Browns game. The difference here is that, for the first time in a long time, the Browns' Sunday game is an evening affair.

That means, the city claimed today, that they will not open the Muni Lot until 2 p.m. and that they will not allow cars, vans, buses and the assorted rag-tag assemblage of vehicles to line up on the exit and onto the shoreway. Which is, of course, where everyone lines up in the wee pre-dawn hours for 1 p.m. Sunday games.

"We will have personnel to keep you moving," said a police traffic officer at the press conference, "if you attempt to wait on the highway."

We’re live at the Muni lot with @clepolice to talk about safety and traffic before this Sunday’s @browns game! https://t.co/e9XPvIdS6m

Also, the city says, they will restrict all pedestrian access to the lot until 2 p.m., so hypothetically they will not allow anyone to camp out with chairs to save spots. Again, we'll see how this goes.

The lines, not the 2 p.m. entry, will surely be the issue — people will obviously avail themselves of bars and other parking lots throughout downtown Cleveland — though the one is inherently entangled with the other. Lines of buses and RVs camped out on the highway at 4 or 5 in the morning is a whole different beast than that same armada camped out in the middle of a Sunday afternoon.

Some Muni Lot denizens camped out on South Marginal before the lot opened for last year's Thursday night game against the Jets. Expect others to pull up on area side streets or idly circle around until critical mass forms and the cops simply give up.