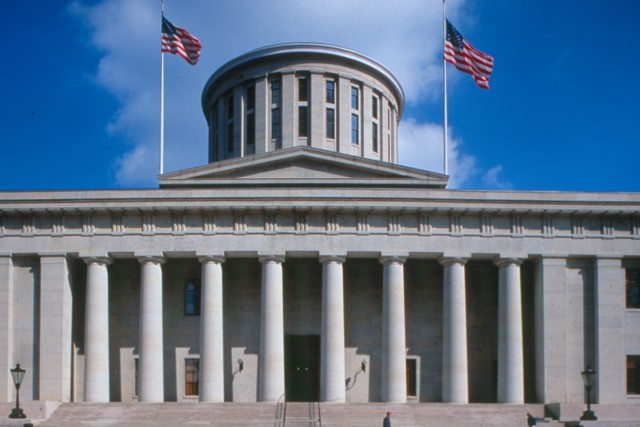 A group of Ohio mayors, law enforcement personnel and gun violence survivors including Whitney Austin — who was shot 12 times during the Sept. 8, 2018 mass shooting at Fountain Square — gathered in Columbus yesterday to express support for a raft of changes to the state's gun laws.

Among the measures the group supports: a 17-point-plan by Ohio Gov. Mike DeWine drawn up after the Aug. 4 mass shooting in Dayton, Ohio that killed nine people. DeWine wants Ohio lawmakers to pass a so-called "red flag" law that would allow judges to order guns taken from those believed to be at risk of committing gun violence, strengthened background checks and other measures.

Other potential legislation could include raising the minimum age for purchasing firearms.

The group, which included Republicans like Lancaster Mayor David Scheffler, met with state lawmakers and DeWine today. Members of the Ohio House GOP were not present at that meeting, but say they are hesitant to back any proposed laws before they see the final drafts of legislation. Gun rights groups have signaled they are not supportive of the measures.

The news conference comes one day after the Ohio Senate began debate on seven different bills involving gun control, including expanded background checks, a red flag law and a move that would raise the minimum age for buying a gun to 21 years old.

"This is a moral issue that should be above partisanship," Cranley tweeted after the meeting. "Thank you to @GovMikeDeWine for spending a significant amount of time w/ our bipartisan coalition of @OhioMayors and police chiefs today to discuss his 17-point plan to #DoSomethingabout gun violence in Ohio. We are standing together to push for change."