Channel 3 Gets New Logo, Rebrands as '3NEWS at wkyc studios' 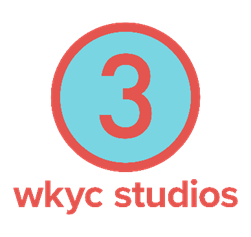 As part of a sweeping rebrand, WKYC Channel 3 is now wkyc studios. Its news operation will be known as "3NEWS." Multiple new reporters and anchors have joined the staff in the past few months. And Monday, station execs made the rebrand official after the Browns telecast.

The changes are in many respects stylistic. The logo is now a "modern but classic" number three inside a circle, reminiscent of an old-school typewriter key.

"You've got the comfort of the blue," says Betsy Kling, explaining the colors in a video tour of the renovated studios on Lakeside, "but the sizzle and pop of the orangey color."

“While 3NEWS will always have the breaking stories, weather and information that our community needs, now we seek to provide what you’ve told us you want: more solutions, more perspective, more hope and even more fun," said wkyc's content director Adam Miller, in a statement provided to the media. "We’ve added exciting new hires to the familiar faces you know and trust to deliver more relevant and useful news that helps people embrace change and live better lives.”