In the middle of last Saturday's glorious and sunny afternoon, an extensive Cleveland Public Power outage left a huge swath of the west side without electricity.

That outage, which was received with the usual frustration and anger enjoyed by CPP customers, was caused by a "failed lightning arrester at the Division Avenue substation," a CPP spokesperson told Scene Tuesday.

Initially, CPP estimated there were 4,500 customers affected, but eventually said that it was far more extensive than that. (CPP's spokesperson has not yet responded to a follow-up inquiry on how many customers were actually affected, or for specifics on the geographic area of the outage.)

Outage Update: Upon further investigation of the current outage, CPP has determined that the affected customers base is more expansive than originally thought. @CityofCleveland

Basically it's a surge protector that works to divert power to the ground, whether the surge comes from a lightning strike or from a surge somewhere in the line. 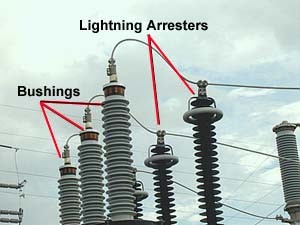 "We removed [the failed arrester] and brought everyone back into service over about an hour and 45 minute," the CPP spokesperson told Scene yesterday. That, of course, is little consolation to the many businesses that had their profitable and busy Saturday afternoons interrupted by CPP once again.

It seems the @WestSideMarket only loses power on Saturdays during peak hours. Ruined what would have been a good day. (Yes we are aware that power loss was widesweeping, and that @clepublicpower sucks) https://t.co/Q5YjPCKdVU