When I slip into the kitchen of Sawyer’s restaurant at Van Aken District, the man behind the moniker is engulfed in a dervish of crimson embers. With each new piece of timber tossed into the grill comes a flurry of fresh sparks that drift precariously close to the chef’s shoulder-length locks. The heat is so intense that it can be felt from 10 feet away, but tolerated only from a safe distance of five.

Welcome to the joys of live-fire cooking. 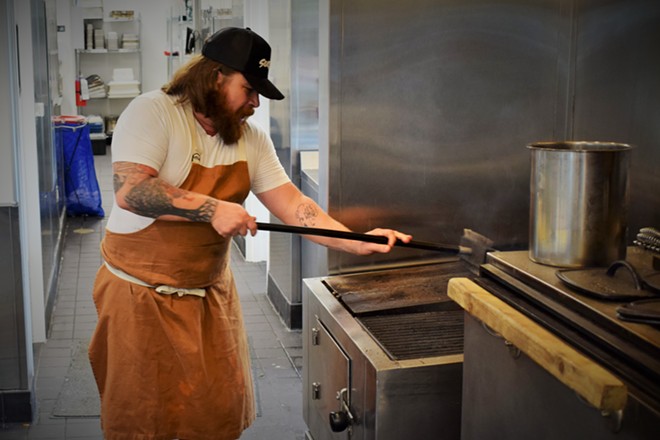 Jonathon Sawyer calls it “wood worship,” a process that results in food so good that it’s worth the hassle.

“Wood-fired cooking makes the simple food that we like to cook taste even better,” the James Beard Award-winning chef and owner explains. “The customers can see and smell the wood fire before they even taste and enjoy the food. The theater of it all helps create the experience.”

In addition to a wood-fired grill, the kitchen setup also features a chapa, an inch-thick slab of steel that functions as a super-heated griddle, and a Josper, a combination grill and oven that is fueled by glowing coals and hovers in the 700- to 800-degree Fahrenheit range.

Sawyer and his chefs de cuisine, Adam Bauer and Logan Abbe, currently are testing and tweaking recipes in advance of a mid-October opening. The goal is to whittle down all of the ambitious culinary riddles presently keeping Sawyer up at night to a manageable roster. Added pressure comes from the fact that Sawyer recently opened SeeSaw in Columbus, while simultaneously crossing the 11-year mark at Greenhouse Tavern, and he is determined to make Sawyer’s distinct from each.

“We’re taking some of the things that we love from Greenhouse and SeeSaw in Columbus, but we want it to be something specific to here,” he says. “SeeSaw is more small plates, sharable items, and the types of casual dishes that you could eat daily throughout the week. The menu is fun, easy to understand and yet still different from anything that you’ve had before.”

In contrast, Sawyer’s will be a step up in terms of price, polish and presentation – a grown-up version of Greenhouse Tavern, as the chef often describes it. While the menu is still (always, when you’re dealing with Sawyer) a work in progress, it will likely feature a tantalizing mix of creative starters, mains and sides kissed by flames and finished with meticulous attention.

In place of the ubiquitous blistered shishito peppers, Sawyer’s will offer the chubbier padrons, which feature a heat, flavor and texture combination that the former chiles no longer seem to possess. Burgers will be seared over wood on that devil-hot chapa and served with beef-fat fried potatoes. An elaborate fried chicken dish presents an intact half a bird that is breaded and fried and utterly boneless. A twist on raviolo al uovo, egg yolk-filled ravioli, will be stuffed with yolk jam and gilded with smoked butter and herbs. Whole fried fish is currently having a moment, but Sawyer’s will sell salt-baked fish (fluke, halibut, flounder and/or monkfish) that is presented whole, but sliced and plated in the kitchen. Because the chef is utilizing only the meaty tail portion, diners will not encounter those vexing pin bones.

Upon crossing the threshold into the freshly minted restaurant, one can’t help but notice how different it is from Greenhouse Tavern. In fact, it’s the antithesis. Whereas Greenhouse is rustic, woodsy, cluttered and slightly disjointed, Sawyer’s is sleek, bright, minimal and contemporary. Sexy arched passageways give way to sumptuous leather banquettes set against gleaming white tabletops. Pops of color come from navy blue fabric-covered chairs, copper-trimmed light fixtures and phosphorescent door panels.

The restaurant seats approximately 90 guests, but it feels much smaller than that. Various sections or zones foster a feeling of intimacy and calm. A central raised dining platform is like a dining room within a dining room, a semi-private space separated from the rest of the room. Tucked away in a corner, a 12-stool white terrazzo-topped bar offers views of the semi-open kitchen.

“I just don’t want the restaurant to ever feel empty – that’s awful for the experience,” Sawyer explains. “On a weeknight, you have to be able to come in and sit down in the dining room and have it not feel empty. That’s the whole idea behind these smaller spaces.”

Another unique feature is the host station just inside the front door that doubles as a satellite bar. Guests can check in, grab a drink and head outside to the greenspace thanks to newly relaxed open container laws. Down the road, an indoor-outdoor rooftop bar will join the mix.

Sawyer admits that his timing could not have worked out worse. Opening two restaurants in the span of 40 days is something he does not recommend, but that’s just the way the dominoes fell.

“It’s ridiculous,” he says. “I just take it one day at a time, because the farther we look down the road, the worse off we are. We could kill ourselves for the next 24 hours and probably set the place up or slow play the next two weeks and make sure that everything is where we want it to be.”

When it does open, on or around October 16, Sawyer’s will mark the 17th restaurant opening that Sawyer has been a part of. From his high school Houlihan’s days to Michael Symon’s Parea in New York City to Greenhouse, Noodlecat and Trentina in Cleveland and SeeSaw down south, the chef has seen and done it all. A new partnership with FWD Hospitality, however, is alleviating some pressure going forward.

“I was tired of being the president, CEO and CFO,” he admits. “With this new partnership the goal is to allow me to just focus on food, be the maître d and make sure that we’re doing enough events so that people understand who we are, what we are and what we’re doing.”

At the start, Sawyer’s will be dinner-only Wednesday through Sunday. Weekend brunch and weekday lunch will be added down the road.