Jack Casino Wants a Second Pedestrian Bridge, Which is a Horrible Idea That Shouldn't Happen

Jack Casino's proposal to add a second pedestrian bridge will appear before the Cleveland Planning Commission's Near West/Downtown design review committee on Thursday.

In a godforsaken world where this abysmal idea somehow receives approval, Jack Casino (Phase 1, of course) would be connected to the May Company building and parking garage at the corner of Prospect and Ontario by a pedestrian bridge (a Phase II, if you will) to the north of the existing bridge that connects the casino to the casino parking garage. 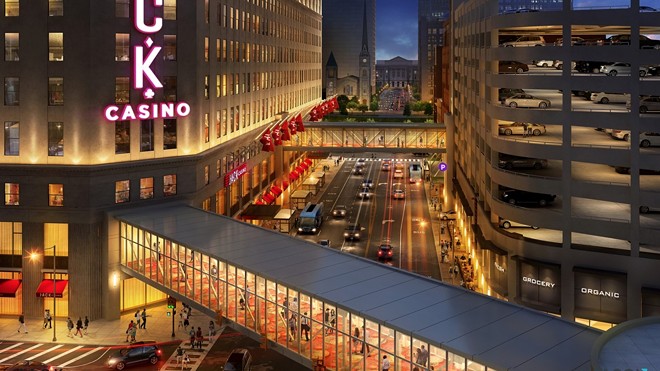 This would be bad — an abomination of planning, to be more exact — and should be swiftly rejected for many of the same arguments raised against the first pedestrian skyway some eight years ago.

The glass-enclosed pedestrian bridge would slice diagonally over the major downtown intersection of Ontario Street and Prospect Avenue, partially obstructing views to and from Public Square, the New England-style civic commons in the heart of downtown.

The negative impacts of the changes proposed by Rock Gaming are hard to quantify, but they’re the kind of actions that can erode a city’s visual integrity and sense of place, even its identity.

Nevertheless, it’s unsettling to contemplate a beautiful building disfigured by having a walkway stuck in its facade. It’s something like poking a straw in Mona Lisa’s nose.

No matter how glassy and transparent it is, the walkway will block views, including vistas of Tower City Center, the vast office, retail and hotel complex built on the southwest flank of Public Square between 1924 and 1930.

Unfortunately, there’s little chance that the city will stand in Rock Gaming’s way or push for better alternatives.

Note that everything he worried about came to pass. After all, who doesn't love this view?

Who doesn't love historic downtowns marred by auto-centric amenities that empty out sidewalks and obliterate classic design in favor of GET THESE GAMBLERS IN HERE AS SOON AS POSSIBLE WITH THE LEAST AMOUNT OF DISCOMFORT?

The second bridge, Rock says, would, "leverage the prime, central location of the parking garage to revitalize the street-level retail frontage on Ontario and Prospect." Which is of course a joke in addition to being demonstrably false, as the bridge would funnel folks high above the street and directly into the casino and offices above.

Anyway, whereas Litt once lamented, correctly, that Cleveland wouldn't have the stones to say no to Gilbert, hopefully that will be different today.