In Advance of Next Week's Show at MGM Northfield Park — Center Stage, Dane Cook Reflects on His Nearly 30 Years in Standup 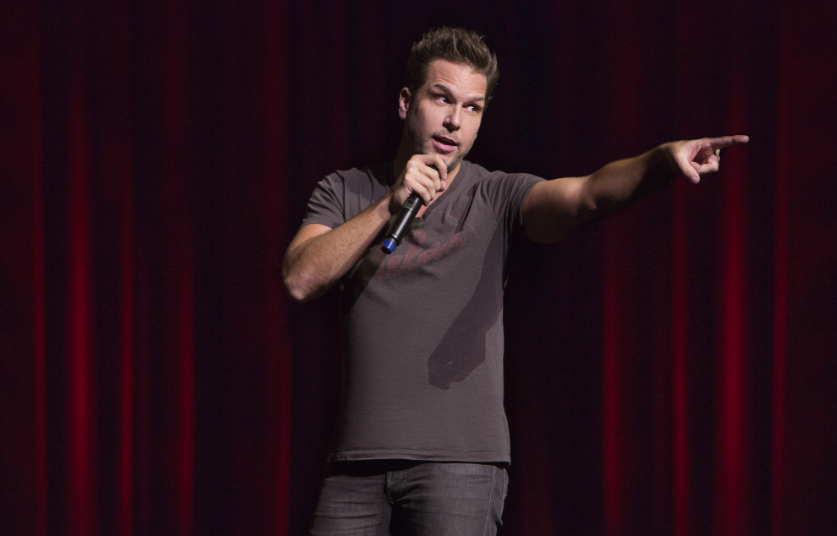 Don’t call it a comeback. Comedy giant Dane Cook never truly dipped out of the comedy circuit, but for a number of years, he’s been pretty subdued about it…until now.

“I know people do love the term ‘comeback,’ and it’s a sexy media word to encapsulate,” Cook, 47 says in a recent phone interview. He performs at 8 p.m. on Friday, Oct. 18, at MGM Northfield Park — Center Stage. “But to me, ‘comeback’ always feels like when you’re watching that movie about a boxer who literally stopped fighting for 10 years and has no business getting in the ring against some new, young stud who is unstoppable. Then you go, ‘This is the comeback moment.’ I kinda get that…' Cause when you come in and outta the media’s eye, they wanna call it something.”

OK, but if there was such a moment for Cook, it was probably last year.

After a few years of polishing new material in comedy spots around L.A., Cook decided to test it out on the road last year at what he describes as “kind of an underground capacity.” There was a time when Cook was the hottest name (and face) in comedy, earning around $20 million a tour; selling out arenas with special tours like Rough Around the Edges and Isolated Incident. But unlike those mega tours of the early 2000s, he wouldn’t give last year’s tour a name.

It was basically a chill invitation for die-hards. Or as Cook explains it, it was just him “cool-y inviting fans out, instead of a big media thing like this year, where there’s late-night TV shows and podcasts. Last year was about sort of treating it like formative years in comedy which was like, ‘I’m going to let the tour and word of mouth speak for itself.’”

It was a risk, but it worked, just like it did back in his MySpace days. It’s wild to think he’s been at this for almost 30 years now. In the MySpace era of social media, Cook was just a dapper up-and-comer comic, but he was also one of the first performers to crack the social media code for marketing yourself. He built a cult-following of fans online, and it launched him to unprecedented heights.
Inviting fans out online worked again last year too.

Last year’s visit from Cook sold out two back-to-back MGM Northfield shows. It was his first time performing in Northeast Ohio in almost 10 years (he performed Isolated Incident back in ’09 at what is now Rocket Mortgage FieldHouse).

This year, his tour has a name— Tell It Like It Is — which is exactly what the self-aware comic is doing in interviews, and it’s especially what he’s been up to on Instagram.

Scrolling through Cook’s Instagram account, you’ll find nostalgic photos of him from those earlier comedy acts, BTS shots from his slew of his movies, cozy pics of him and his almost-20-year-old girlfriend Kelsi Taylor, but more than anything, you’ll find his posts are introspective and inspirational — something that’s very much intentional.

“I feel like it’s important to me to share the breadth of my life and livelihood because, at this point, I’m graduating classes ahead. I’m not a new face. I’m not up and coming. I’m in a different, second-act realm,” he says. “I do know that from where I’m at now, it feels good to be able to reflect and share so that maybe if a young person — or people that just want some inspiration — can look and go, ‘Oh wow, I know him for his comedy, but I didn’t know about the turmoil or maybe anxiety or trauma.’ It’s a survivor’s story and it’s one that also lives within a pipe dream. So, I like sharing all that stuff, whether it’s about love or whether it’s about loss, I’m very comfortable having weathered those storms or basked in that sunlight. Why not share that?”

He says last year’s return to touring was more about “reaffirming and reestablishing.” The huge turnout and warm feedback (namely an outpouring of love from fans in his DM’s) were palpable. “I was so emotionally moved by not only the ‘welcome back,’ so to speak, but just how great I felt on stage with everything that I had learned,” he says.

The dude has learned a lot. He’s evolved and so has his material. He recently challenged himself to hit the mic and stand completely still throughout his sets — a very un-Dane Cook thing to do but he loves the balance it’s given him. Today, his stage presence isn’t totally still, but you’ll notice it’s not the same level of physicality we’re used to either.

“It’s helped because when you’re getting very honest or stark about something—the eyes are the window to the soul. You want people to feel like they can really connect with you, not like moving around or adding energy or character or whatever that might be,” he says. “Having that stillness and that sometimes silence—a bit of quiet—it has been such a wonderful commodity in terms of being coupled with my natural enthusiasm and energy that just happens when I get out on stage. I’ve become more patient with myself. I’m allowing myself to have those [moments].”

That’s not the only time he’s challenged himself though. When he sold out Madison Square Garden in 2007 with Rough Around the Edges, the show was about 50 percent improvised, hence the name. Talk about pressure. This new tour hasn’t brought him back to MSG, but it brought him to Radio City Music Hall for the first time, which he says was just as gratifying. He had such a great time; he says he didn’t want to leave.

“It was almost like if you took Madison Square Garden and instead of it being like, ‘I gotta prove this thing to everybody’ — just take away that part and it was just about the performance without all the gusto around it… the hype and the polarization. ‘Do ya love him, do ya not?’ It was just a great night with a performer that’s feeling great in a fun show that I feel like exceeded my own expectations.”

Notoriously tight with his fans, Cook’s bewildered by some of the ages of the fans he’s chatting with at meet-and-greets lately.

“I’m meeting a lot of much younger people. Shockingly, young people are at my show,” he says.

What’s happening is original Cook fans are bringing their kids to the show now, but the kids are already fans — maybe they’re not as familiar with his standup but they know him for his movies that continue to stream on their devices.

Although his fans remain die-hard, Cook’s aware that they’re changing and so are the times. “That’s always the challenge as a comedian; to stay true to yourself and also sometimes be willing to change when media and the public dictate, ‘Oh, we’re into this kinda thing now.’”

Even though there’s plenty of political comedy on the table right now, it’s still not Cook’s brand to dive into those waters. His work, although now more introspective than ever, remains largely observational. He wants his shows to be an opportunity to unplug.

“I think comedy, more than ever, definitely needs to be part of your escape plan because we’re inundated — definitely now with news and stuff but just even on your phone all day or Twitter feeds,” he says. “It’s very important to be able to get in a room, put on a show with people and feel like there’s still some escapism even though we do need to talk oftentimes about what’s happening right outside our window.” He says he wants his sets to be “more of a joyous escapism” rather than a comedian’s political opinion about what’s happening right now though.

This “second act realm” he says he feels similar to the way he felt when was still a kid in comedy.

“When I was trying to figure out what it meant to be the first new comic of a new generation that was like hitting heights that nobody had really achieved in 30 years, there was no playbook and there was nobody really helping me outside of a couple of mentors,” he says. “So, I made mistakes and I fucked up and sometimes I had to, you know, embarrass myself or whatever it was that I needed to do publicly–I learned a lot. I’m doing those things again in terms of where do you take a career now that you’ve got — not just a foundation — you’ve got a building, you have platforms and so much more to be able to invite people into the space?” he says.

Being a comedy vet doesn’t make the gig any easier though. “I wouldn’t be honest if I said I’ve got it all figured out. Getting older in an industry and changing… it’s an interesting and exciting new perspective because now I get to also — in that comedy self-deprecating way — kick the piss outta myself and jab at myself.”

“It’s like ‘Yeah, I’m a kid from fucking welfare — Arlington, MA — I can make fun of myself that I got to a place where I can rent a private plane. That’s my truth — that I’ve been both.”

Looking back on the 30 years he’s clocked in, Cook comes across as nothing less than eager and appreciative to keep at it.

“It’s crazy and it’s very fortunate because this is a very hard industry to find your footing and to be able to have longevity,” he says. “I’m very proud to have looked at a lot of my fellow performers that I started with that are not only having that longevity, but some of them really coming into their own later.”