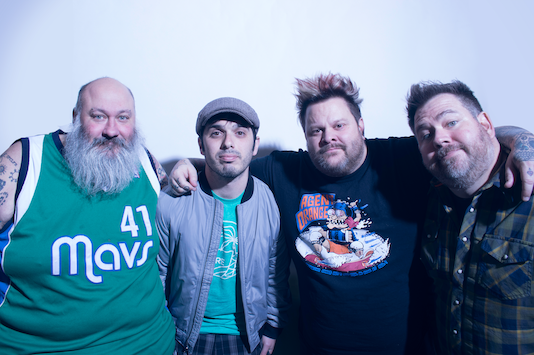 Continuing their 25th anniversary celebration, pop-punksters Bowling For Soup have teamed up with the ska act Less Than Jake for a co-headlining tour they’ve dubbed Good Vibes & High Fives. Bowling for Soup's big hit, 2004's joke-y"1985," tells the story of a housewife longing for a return to the '80s. It became a hit on commercial radio and helped land the band on Warped Tour. Another Warped Tour alum, Less Than Jake delivers high-energy sets that draw from old school ska and punk. Expect the most pit to be going strong at this show. (Jeff Niesel), 7:45 p.m., $25 ADV, $30 DOS. House of Blues.

With its fifth studio album, Lilac, the Early November shifts toward a more pop-centric sound, something that’s apparent right from the opening track, “Perfect Sphere (Bubble),” a track that features soft vocals and gentle guitar riffs. Tracks such as “My Weakness” and "Comatose" have more of an edge to them, so you can expect the band’s live show to feature a mix of material. (Niesel), 7 p.m., $17 ADV, $20 DOS. Mahall's 20 Lanes.

Into the Blue: Grateful Dead Revival

Regardless of your take on the Grateful Dead, the band to which Into the Blue, an ensemble of local musicians pays tribute, the group maintains a damn important stature in the rock 'n' roll canon. Into the Blue revives that spirit and lends it the respect Jerry and Co. rightfully deserve. Anyone interested in hearing — and seeing — great music flow from the stage should check out what these guys are doing. Fellow musicians and artists will glean inspiration. (Eric Sandy), 9 p.m., $11 ADV, $14 DOS. Beachland Ballroom.

Influenced by blues guys like John Hammond and Hound Dog Taylor, George Thorogood and the Destroyers and released four albums before hitting the mainstream with the 1982 hit "Bad to the Bone." Then, the hits kept coming as the gruff-voiced singer delivered tracks such as "I Drink Alone" and "Who Do You Love." Expect to hear these songs and more at tonight's show. (Niesel), 8 p.m., $27.50-$65. MGM Northfield Park.

Produced by Ted Hutt (Old Crow Medicine Show, Gaslight Anthem, Lucero), Tiger Army’s new album, Retrofuture, features vintage fuzz, tape echo and reverb. It sounds like it was recorded in a different era. Frontman Nick 13 used gears from the '50s and '60s, and that gives his surf & punk-inspired songs a real authentic feel. As much as many of the songs here have a punk edge to them, Nick 13 excels at ballads such as "Black Neon." (Niesel) 7 p.m., $25-$30. The Phantasy Nite Club.

Lust Records Battle of the Bands

Today, Lust Records hosts its first annual Battle of the Bands in Cleveland. The event features '60s-minded contemporary garage-punk, rock’n’roll, rhythm & soul and psych talent from across the country, and performers include Cleveland’s MA HOLOS and Oregon Space Trail of Doom, South Carolina’s Boo Hag, Detroit’s Moonwalks and Rochester’s Televisionaries. The winner headlines a private record-release party at Franklin Castle and records a 7-inch with Lust Records and Norton Records. A panel of judges will select the winners. (Niesel) 7 p.m., $4-$8. Mahall's 20 Lanes.

Since parting ways with Barenaked Ladies, singer Steven Page has kept busy. He has composed six Stratford Festival scores, has collaborated and toured North America with Toronto' Art of Time Ensemble and performs as a member of the Trans-Canada Highwaymen. He serves as the host of the TV program The Illegal Eater and became a Chopped Canada Champion in 2017. He also recently appeared in the award-winning Riddle Films production of Dreaming of a Jewish Christmas and is currently working with playwright Daniel MacIvor on a musical commissioned by the Stratford Festival called Here's What It Takes. Last year, he released his fifth solo album, Discipline: Heal Thyself, Pt. II, an album of catchy pop tunes that often recall ’80s synthpop, and earlier this year, he embarked on an East Coast tour with Symphony New Brunswick and took his trio on the road. He’ll have the trio in tow for tonight’s gig. (Niesel), 8 p.m., $22-$32. The Kent Stage.

The classic rock act Toto has been touring the globe over the course of 2018-2019 in celebration of the band’s 40th anniversary. Along the way, the group performed in front of well over a million fans across Europe, North America, Asia, Australia, New Zealand and even Indonesia. The band’s popularity has recently surged thanks to a rediscovery of favorites from their beloved repertoire that’s captured on the new release, 40 Tours Around the Sun. The live performance was recorded in front of a sold-out crowd exceeding 18,000 fans last year at the Ziggo Dome in Amsterdam. The group performed a wide range of songs, including hit singles, rarely performed live deep cuts and two newly recorded tracks. Toto brings the final leg of this extensive global tour to town tonight. (Niesel), 7:30 p.m., $48.50-$75. MGM Northfield Park.