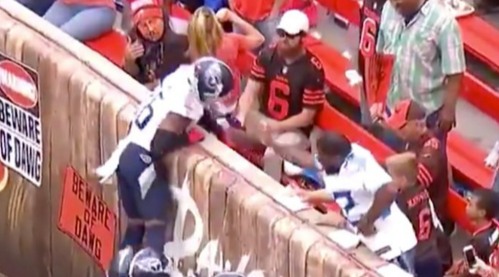 Earlier this year the Cleveland Browns accused a man named Eric Smith of pouring beer on a Titans player during a game. A vice president from the team called him and told him he was banned from the stadium. They had evidence, they said.

Eric Smith was not at the game. In fact, he hadn't been to a game in nearly a decade. So he was pretty shocked to hear the news. Especially since he had watched the first part of the game at home and then decamped to the Ariel International Center to DJ a wedding before the game was over.

The story went viral, partially because it was but just the latest example of the Browns being the Browns.

And that's about where it should have ended.

All Smith wanted was a public apology from the Browns. Instead, they offered him tickets to a game — something he clearly hadn't been interested in, given his lack of attendance over ten years of Browns' games — and declined to publicly apologize.

“Our intent was to act swiftly and decisively. Unfortunately, we didn’t do enough homework," a Browns spokesperson told him on the call, according to the lawsuit.

So, this week, Smith filed a lawsuit in Cuyahoga County alleging defamation and negligence, arguing that the Browns' actions damaged his reputation and inflicted emotional stress. You can read the full lawsuit below.
See related PDF image.pdf