Celine Dion Returns to Cleveland After 10 Years and Slays 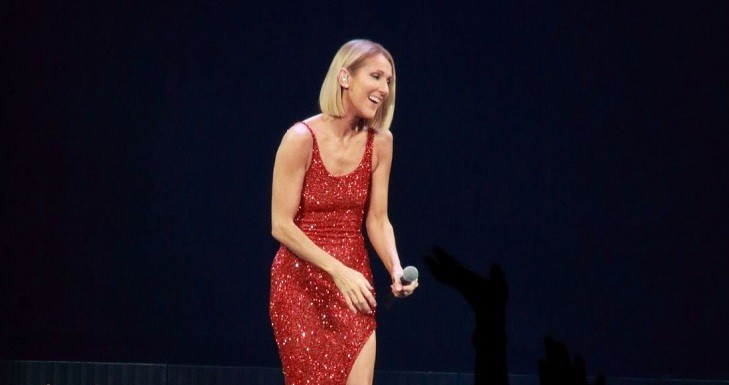 After Celine Dion hits one of those ungodly notes in her repertoire, she often does something a little unexpected — she celebrates.

Just like a football player who scores a touchdown in the most spectacular of fashions and then poses and screams with his teammates, Dion belts out the most eye-watering of decibels on stage and then pumps her fist, as if to say, "Hell yes, I just did that."

But what makes this diva even more of a unicorn is that these movements come off as endearing, rather than too self-admiring. And at last night's sold-out Rocket Mortgage FieldHouse show, the first American stop on her recent Courage World Tour, Dion was in the most celebratory of moods, gladly sharing her talents with the people of Northeast Ohio.

(See all the photos from last night's show right here.)

Entering center stage from a trap door in a bright red Jessica Rabbit-esque dress, Dion quickly rolled into the power ballad "It's All Coming Back to Me Now." Her voice was every bit as strong as when the cover came out in the mid-'90s. She unfortunately did not perform the entire 7-minute album version, instead, and understandably, choosing to move on with the show.

A large video screen box then lifted up into the air to reveal an entire band, complete with a horn section, a string quartet, two drum kits and three backup singers. She got right into one of her more recent hits, 2007's "That's the Way It Is," electrifying the crowd.

"You're looking so good tonight," Dion said after finishing the song. "It's been more than 10 years since I've been to Cleveland. What is that? I can't even count to 10. Way too long. Maybe they locked me up in Vegas. But I escaped, and I came to Cleveland, and it feels fantastic."

And truly, she looked fantastic and healthy with a brand new shoulder-length blunt bob haircut. Throughout the show, Dion had five costume changes, all achieved in mere minutes. In the downtime, her band excelled at keeping everyone entertained while various videos showed Dion putting on makeup, dancing and moving through water.

Rest assured Dion came armed with all of her hits. Her "The Power of Love" rendition was transcendent of time and space with her "All By Myself" not too far behind. She beautifully sang the "Beauty and the Beast" duet with one of her backup singers, while choosing to do "The Prayer" as a solo rather than a duet (originally performed with Andrea Bocelli, who as Dion pointed out, was not there).

But it was on the mostly French-language song "Tous Les Blues Sont écrits Pour Toi" that Dion went nuts. Not only did she show off her flexibility, hitting a standing back bend, but she also sang a note so high in the stratosphere it's still unclear if she didn't just make it up.

As she does have a fresh album out now, Dion, of course, was required to sing a couple of the new ones, too. And none of them were bad. The album's title track, "Courage," was especially moving.

What was so glorious about last night's performance was that you could tell she was singing live because it wasn't always 100 percent perfect. Not to say Dion ever missed a note because that's probably not possible, but every now and then she'd toy with the timing of a phrase or noodle around a little too much.

The final song of the night (before the encore, obviously) was a mash-up medley that included Queen's "Another One Bites the Dust" and Prince's "Kiss," among others. And while these tunes offered her an opportunity to get the crowd pumped up — she doesn't have a whole bunch of upbeat songs in her repertoire after all — that part of the show felt like a leftover from her Caesars Palace residency in Vegas. She could have easily dug into her own catalog of songs here.

After she left the stage for one last costume change, we all knew there was one song she hadn't performed yet — her biggest worldwide hit "My Heart Will Go On." Arriving back in the fluffiest fairy godmother dress of all time, Dion obliged her fans by singing the Titanic heart-stopper with every ounce of passion she could give. The song was made even more magical with a beautiful drone light display flying around her head.

With the final "my heart will go onnnnnnnnnnnn and oooonnnn," she lifted her hand to the sky in celebration. And if you had the power to make women and men weep in their chairs from just the sound of your voice and your presence, you would probably celebrate too. It's a power that Dion has chosen to use for good.

Finishing out the night, she sang a song "you all know well," John Lennon's "Imagine." It was delicate and sweet.

We all could have listened to her sing for a couple more hours.