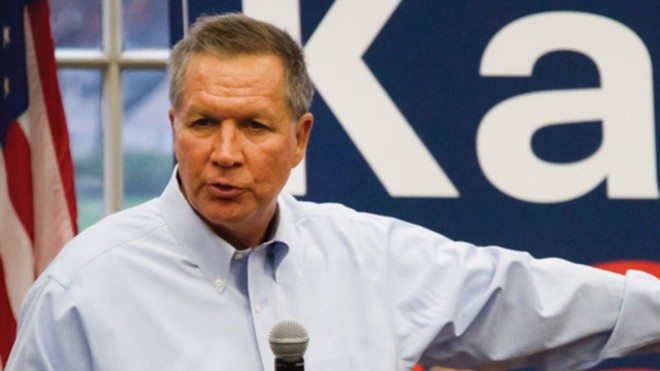 The admission earlier this week by Acting White House Chief of Staff Mick Mulvaney that the Trump administration withheld military aid to Ukraine in part to encourage that country's leadership to investigate uncorroborated allegations that foreign governments helped the Democratic National Committee in 2016 was the breaking point for Kasich, he said.

Kasich was one of the last candidates standing against Trump in the 2016 Republican Party presidential primary and has been a vocal critic of the president since that time. His name is occasionally floated as an independent or primary challenger to Trump in 2020, though it is unclear whether or how Kasich would pursue that.

"This has been a very difficult 24 hours for me," Kasich said. "The issue of impeachment is really big to me. When I heard what Mulvaney said, the chief of staff or the president, it really pushed me across the Rubicon, and I'll tell you why. Withholding military aid to a nation like Ukraine, which has Russian troops inside its territory and is threatened all the time, so that a political operation can take place... to me, it's totally inappropriate and it's an abuse of power."

The president faces impeachment proceedings brought by Democrats in the U.S. House of Representatives over his phone call with Ukrainian President Volodymyr Zelensky in which Trump appeared to offer the release of U.S. aid to Ukraine in exchange for an investigation into the Democratic Party and its front-running presidential primary hopeful and former Vice President Joe Biden.

The president's critics — including Democrats but also Kasich and U.S. Sen. Mitt Romney, both Republicans — say the president broke the law with those statements and subsequent public statements asking Ukraine and China to investigate Biden and his son, Hunter Biden, who served on the board of an energy company in Ukraine.

During his time as vice president, Biden pushed Ukraine to remove a Viktor Shokin, a prosecutor there long-thought to be corrupt. Trump alleges that the elder Biden did so because that prosecutor was investigating his son.

Thus far, there is no evidence that this was the case — and a number of statements from officials both in the U.S. and Ukraine, including U.S. Sen. Rob Portman of Ohio, show that the prosecutor who was removed was indeed suspected of corruption.

Mulvaney in his statements at a press briefing yesterday did not tie the release of the aid to investigation of Biden specifically, but instead to the investigation of a server belonging to the DNC.

“Did [Trump] also mention to me in the past that the corruption related to the DNC server? Absolutely, no question about that," he said. "But that was it. That’s why we held up the money."

Mulvaney later issued a statement saying there was "absolutely no quid pro quo between Ukrainian military aid and any investigation into the 2016 election" and accusing the media of "misconstruing" what he had said earlier.

Kasich said he wants to see the articles of impeachment the Democrats in the U.S. House of Representatives draw up, and hasn't been totally happy with the way they've conducted their impeachment inquiry. But he also said he believes Trump's actions rise to the level of impeachment at this point.

"I say it with great sadness," he said. "This is not something I wanted to do... but this behavior cannot be tolerated and action needs to be taken."