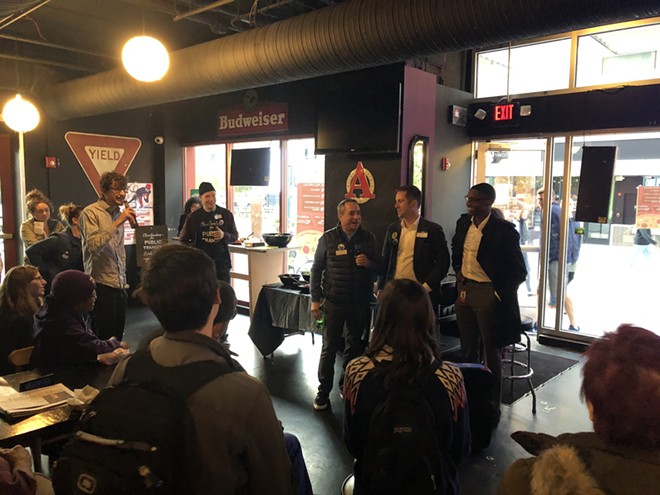 Cleveland City Councilman Kerry McCormack confirmed Friday that a draft of legislation to decriminalize fare evasion has been prepared and is being reviewed by council's lawyers.

McCormack told Scene that he wants to make penalties for fare evasion on Cleveland's Greater Cleveland Regional Transit Authority (RTA) vehicles effectively the same as penalties for parking violations. His preference, he said, would be to reclassify the violation as a civil, rather than criminal offense. But if the state requires that fare evasion remain a criminal misdemeanor — that's what the lawyers are checking on — he'll settle for significantly reducing the financial penalties.

McCormack told Scene he's aiming for the end of this year or the beginning of next to introduce the bill to his council colleagues. While he has not secured co-sponsors, he said he's not anticipating challenges on that score. Both councilmen Matt Zone and Basheer Jones have seemed receptive, for example.

Zone joined McCormack at an event Thursday evening hosted by Clevelanders for Public Transit, the grassroots advocacy organization, in which the legislation was briefly mentioned. After riding the HealthLine from Public Square to University Circle, attendees gathered at ABC Uptown to discuss the travails of RTA's flagship bus rapid transit route.

Organizers asked the councilmen if they'd commit to working with CPT to decriminalize fare evasion and to restore signal priority along Euclid Avenue, which would give HealthLine buses priority over cars at traffic lights. Both councilmen agreed, and McCormack said that the legislation for fare evasion was already in draft form.

Zone thanked the group for their persistent advocacy.

"The best policies I've worked on in my years on council," Zone said, "have come from advocates like you."

Justin Bibb, a fledgling member of the RTA board, was also on hand. CPT asked him directly if he would work to help restore "proof-of-payment" and all-door boarding on the HealthLine, two factors which would drastically speed up the route. Bibb said that he would.

The slowing of the 11-year-old HealthLine and the consequent decline in ridership occasioned Thursday's gathering, which was appropriately titled, "Healing the HealthLine."

Instead of having unarmed civilian employees checking fares (in the mold of a traditional train conductor), RTA has returned to the fare enforcement method currently used on buses, in which all passengers enter via the front door and show their tickets to the driver, thus slowing vehicles. CPT has found that during rush hour, the advertised 28-minute trip from Public Square to East Cleveland's Windermere Station can take 40 minutes. These delays have added more than 40 hours of additional service per weekday.

Restoring proof-of-payment and all door boarding are both components of CPT's Fair Fares platform.