Madalone did not respond to a request for comment from Scene. 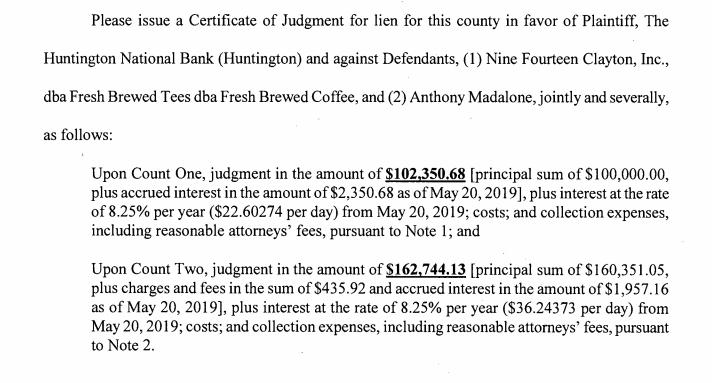 (Separate but related: His company, Nine Fourteen Clayton, is the subject of thousands of dollars in liens by the Ohio departments of taxation and workmen's compensation, court records also show, dating back to at least 2016.)

A receiver was appointed in July and in August Huntington filed a motion seeking to depose Madalone, writing, "The Huntington National Bank, has good reason to believe that the Defendant Anthony Madalone, individually, and as statutory agent for Nine Fourteen Clayton, Inc. dba Fresh Brewed Tees dba Fresh Brewed Coffee, et al. (Defendant) has money or property which he unjustly refused to apply toward the satisfaction of the Judgment; that said money or property is not exempt from execution, attachment or sale to satisfy a Judgment or Order under the laws of the State of Ohio." A judge granted that request. In terms of garnishment, it appears, based on court filings, that Madalone claimed to have an account with PNC. When Huntington sought information on his banking with them, PNC replied that Madalone had no open accounts.

"I was going to be a stockbroker; I have a degree in Finance and an MBA. I didn't want to leave Cleveland or get stuck behind a desk. I started Fresh Brewed Tees the month after I walked for my Master's degree," Madalone told the Plain Dealer in 2017. "I've got a staff of 15 and they're here and all over the country. The COO is in Phoenix, my creative director is in Portland, Oregon and I have a staff of three in Los Angeles. We do a lot of stuff internationally. We've got 40 licenses and do MLB player gear for a number of teams. We're in eight team shops including the Dodgers, Giants, Indians, Diamondbacks, Blue Jays, Oakland A's and Pirates. We've partnered with the Cavs and we're in the Cavs and Browns team shops, too. We are heavy outside of the Cleveland area and in retailers throughout the country like Rally House. We've also just created a partnership with Fanatics, the number one sports licensing company in the world."

With a youthful energy, along with the popularity of Cleveland-branded t-shirts, Madalone became something of a C-list local celebrity, ready-made for local TV spots and social media love. He was named one of Cleveland's Most Interesting People by Cleveland Magazine in 2015.

He entered the Cleveland mayoral primary as an outsider in 2017 and, despite laying out almost nothing resembling a platform, somehow managed to receive 1,515 votes.

He opened a combined brick and mortar store for his shirts and a coffee shop in Ohio City in November 2018. It closed shortly after. A shoe company called Tready was also short-lived venture.

In a February 2018 interview with Crain's Cleveland, which tackled the subject of the tough financial realities of the t-shirt business, the entrepreneur touted his new business, Fresher Media, a creative service agency.

Fresh Brewed Tees released new shirts as recently as August of this year, with designs for the Browns' Mack Wilson and Jamie Gillan. There's no word on the truck itself, but perhaps it was handed over to the bank to help pay off his massive debts. (Unfortunately, whatever Madalone chipped in with Bobby George to pay for Charlie Sheen to visit Cleveland during the 2017 World Series is unrecoverable.) Fresh Brewed's Facebook and Instagram accounts have been dark since the last month of the summer, which is about when Madalone last made a media appearance, this one on WKYC Channel 3 to promote a fundraiser for his Fresh Brewed Tee Foundation's event with Stepstone Academy to promote literacy.