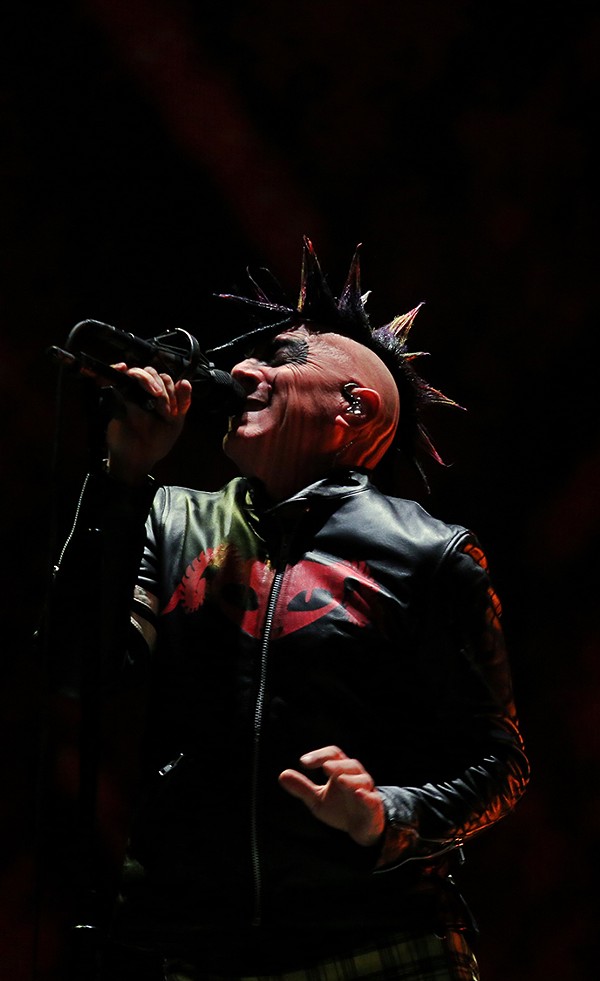 Fear Inoculum, the terrific new album from the prog metal act TOOL resonates right from the start. The opening title track, a song that begins with spine-tingling percussion and a gentle hum before the heavy guitars kick in, sets the tone for the album, the most nuanced record in the band’s catalog.

Appropriately enough, last night’s epic two-plus hour concert at Rocket Mortgage FieldHouse in front of what looked to be a capacity crowd, also began with "Fear Inoculum." Hard-hitting drummer Danny Carey was positioned at the center of the stage, and that made sense. Carey, who wore a Cavs jersey with star forward Kevin Love's number on the back of it, was the driving force for much of the show.

Mohawked singer James Maynard Keenan stayed on the second tier for most of the show, often squatting like a catcher as he swayed back and forth to the heavy music. He alternated between two microphone stands set on each side of Carey's drum kit and often took in the show as if he were a fan, observing the incredibly tight band as it embarked on one of many meticulously crafted jams.

While the white screen in front of the stage created a surreal three-dimensional effect, it also obscured both the band and the visuals that were projected on a giant screen at the back of the stage. Fortunately, it didn’t remain up for the entire show.

While there was a sameness to some songs — the bass riff to “Pneuma” sounded very similar to the one in “Schism” — TOOL’s songs have an intricacy to them, and that separates the band from other arena rock acts. Keenan didn’t ever need to tell fans to stand or sing-along to the songs. That all happened naturally. His banter consisted mainly of making fun of the fact that the band's fanbase had aged. "I felt a breeze," he said after asking all the fans to put their hands in the air and then telling them to lower their hands if they were over the age of 30.

Throughout the show, the colorful video projections that at times resembled digitally enhanced images of molten lava enhanced the show. The images of skeletons and what looked like fetuses also helped create a dark mood.

A very short intermission came past the mid-way point, and the band returned with the bang of a giant gong. The concert concluded with a majestic rendition of “Stinkfist” that the group extended into an aggressive jam.

One minor quibble with regard to the band’s no video/picture policy. We get that the group just wants fans to live in the moment, but some patrons were removed from the show for simply sending a text or checking their email. That irked some people we spoke to, and we agree that those measures seem extreme.

The English post-punk band Killing Joke, a group that just celebrated its 40th anniversary, opened the show with a 30-minute set. The band delivered a white-hot set that drew from its extensive catalog and included the apocalyptic dirge “Requiem” from its full-length debut and the eerily prescient “Pandemonium,” a dire warning about today’s upheaval that the band penned back in 1994.

Norm Narvaja contributed to this review.