Elton John Just Played His Final Concert in Cleveland Ever, And That’s OK 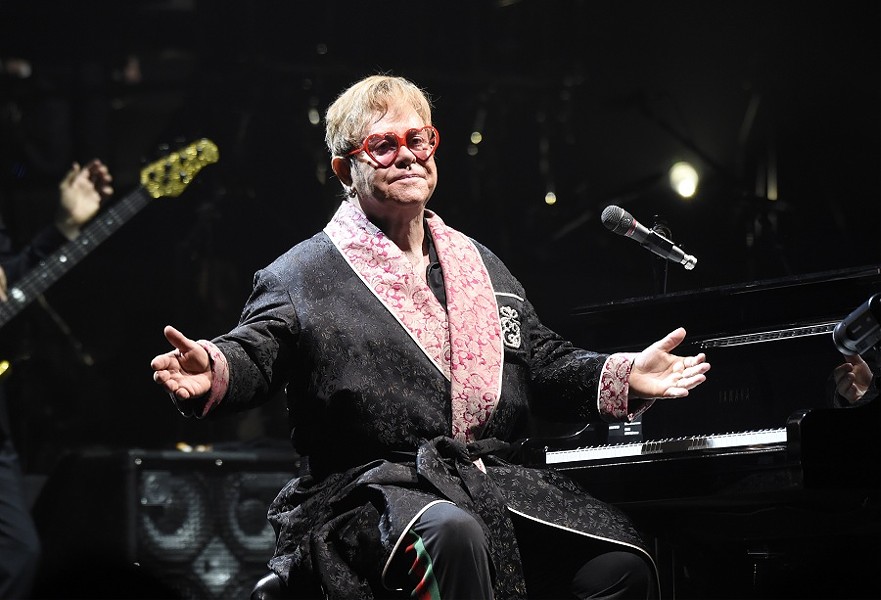 It’s always a tiny bit tragic when a great musician or band stops touring. The part where fans can go and connect physically with their favorite artist is cut off, leaving only albums and YouTube videos and memories from concerts past. Elton John, who came to Cleveland for the second time last night as part of his Farewell Yellow Brick Road Tour, is just the latest leaving his fans out to dry by retiring from the road.

But at least he’s going out with a bang.

John, who is 72, was in town just one year ago playing pretty much the same set of songs. But no one in the audience seemed to care that he wasn't spicing it up with each show as Rocket Mortgage FieldHouse was packed to the gills — every nook and cranny seemingly stuffed with people, including what had to be limited vision seats on the sides of the stage.

Northeast Ohio fans were revved up to see the piano rocker in action, many wearing sequins, boas, sunglasses and Dodgers apparel in John's honor, and when he arrived on stage nearly right on time to play the classic "Benny and the Jets," people went nuts.

Throughout the show, John was ever the consummate performer, banging the daylights out of his grand piano while leading his band to pure, live imperfect perfection. After ever couple of songs he'd stand up from his bench and point his hands out at the cheering audience, mouthing the words "thank you." It's obvious he thrives on this sound. When the cheers died down a bit, he'd gesture for more, which the crowd had no problem obliging.

Songs ranged from most of the hits like "Tiny Dancer," "The Bitch is Back," and "Candle in the Wind" (all of which had fascinating background imagery on the stage's huge screen, including images of a topless Marilyn Monroe), to lesser-known tunes like "Indian Sunset." With the help of his band, he created a tapestry that ebbed and flowed, never allowing the audience to get bored throughout his nearly-three-hour set. He also kindly played full renditions of songs, refusing to just bulldoze through to the next thing.

"Rocket Man" was a huge highlight. While he no longer reaches for those falsetto lines in the song, John can still belt out notes in his higher register. A huge piano and guitar riff elevated the song in the middle, and it included space-themed imagery and lighting.

In general, the stage effects were quite engaging, including a part where John's entire piano appeared to be engulfed in flames during "Burn Down the Mission." When John needed to make a couple outfit changes, lighting and sound effects kept things moving.

For a man who's been making music that people care about for 50-plus years, he didn't talk a whole lot from the stage. But what he did say, he made count.

"In 1990 I had an epiphany I could either carry on being an asshole, or I could ask for help," John said, explaining how he got clean and sober and went on to start his AIDS foundation. He encouraged everyone to be kind to one another because that's what actually matters.

It must be noted that while everyone was there to see John, he was almost upstaged by one of his percussionists — yes, there were three drummers on stage. Situated on the top back riser, Ray Cooper played tambourine like he was swatting away the most annoying mosquito. On cymbals and bongos, he pounded and rocked. To watch him was to never want to look away.

The main part of the show wrapped up with an entirely too-fun rendition of "Crocodile Rock," during which John made the audience sing the chorus, and then "Saturday Night's Alright for Fighting," which included tons of confetti.

Of course, there was never any doubt John wasn't coming back for an encore. And when he did, he arrived in a silk bathrobe to play the two songs we hadn't heard yet: "Your Song," and "Goodbye Yellow Brick Road."

In the end, after his piano had elegantly moved across the stage, John removed his robe to reveal a track suit with his name emblazoned on the back. He then walked onto a clear platform that came out of nowhere and rose into the air like he was headed to heaven. A door appeared in the back of the stage, and he disappeared into darkness.

"The reason it has to end is because 10 years ago I didn't have a family and now I have a family," John said at one point in the show. "But I could never forget all of you ... I get goosebumps every time I think of playing in Cleveland, and everywhere."

After he finally officially retires from the road next December, John will no doubt continue to perform in some capacity as he loves his fans too much. But this is (most likely) the final time the Brit is going to grace Cleveland with his presence. And after last night's show, during which he held nothing back, area fans will always have something to cherish.