In Advance of His Nov. 23 Show at the State Theatre, Actor and Writer Nick Offerman Talks About Overcoming Our Current Malaise 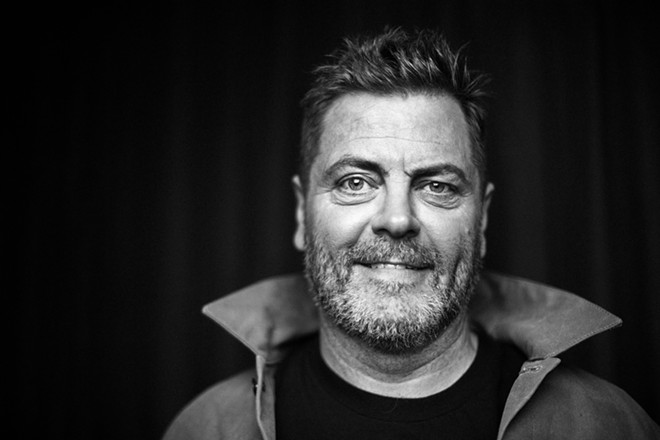 Earlier this year, award-winning actor, writer, woodworker and comedian Nick Offerman announced that he would hit the road for the first time since 2017 with his brand-new live show All Rise. The tour will visit 37 cities across the country, and it includes a Nov. 23 stop at the State Theatre.

“My aim in this undertaking is to encourage my fellow Homo Sapiens to aim higher in life than the channels of consumerism would have us imagine,” says Offerman in a press release announcing the dates.

Offerman promises to deliver "an evening of “deliberative talking and light dance that will compel you to chuckle whilst enjoining you to brandish a better side of humanity than the one to which we have grown accustomed.”

In this recent phone interview with us, he talks about the tour.

What are you up to today?
I am going to Hollywood to record an audiobook of some Wendell Berry essays. It’s a great privilege. I’m over the moon. I got to record Tom Sawyer for Audible, and this feels similar.

How did you become interested in Wendell Berry?
In the mid-’90s, I was doing plays at the Steppenwolf Theatre in Chicago. An actor named Leo Burmester from Kentucky, an old farm boy, was familiar and gave me a book of his short stories. It’s changed my life. Ever since then, I asked how I could get the writing of Wendell Berry to more people. Getting to do an audiobook is a pretty direct way to do that.

I think you published your first book, Paddle Your Own Canoe: One Man's Fundamentals for Delicious Living, in 2013. What was the experience of writing it like? Was it easy or difficult?
Well, I wouldn’t call it easy or difficult. I would call it enjoyable toil. It’s not dissimilar to making a piece of furniture in that it requires focus and openness and humility and the knowledge that my work will be imperfect no matter how finely I sand it. There will still be imperfections. As Wendell Berry says, good work is our privilege and salvation. That really drives me. I’ve poured concrete and blacktopped roads. I roofed buildings in Chicago in the heat of August, so applying my sweat and blisters to the writing of a book is a pretty sweet stroke of good fortune indeed.

You’re very articulate for a comedian. To what do you attribute your well-spoken-ness?
Well, gosh, I don’t know. I feel clumsy when I’m speaking extemporaneously. I love writing and reading and my wife Megan [Mullally] does as well. We’re huge fans of language. It’s a channel [in our brains] that is always trying to find a little more colorful way of saying something than “I’m running to the store.”

If you read everything from Shakespeare to Mark Twain, that’s apt to have an influence.
Wendell Berry is incredibly funny as well. To take a slight notion and see the humor in it is the bass line of the jazz I’m putting out into the world.

What was your favorite stop on the Full Bush Tour?
Well, that was the first show that I brought to Australia and New Zealand. I also played a few dozen American cities over a couple of years. Getting to tour the bejeweled grand old theaters of great American cities is one of the most wonderful jobs I’ve ever had. Rolling into Wichita and playing the Orpheum where Houdini appeared years ago or playing a theater in Dublin where the Marx Brothers did their vaudeville show is incredible. Just Sunday night, I played the Ryman in Nashville for maybe the fourth time. It’s like getting to pitch at Wrigley Field for a Cubs fan like myself. Honestly, with that in mind, since I got my start in Chicago theater, there’s this beautiful Chicago Theatre. It’s as magnificent and beautiful as anyplace I’ve ever seen. When I was young, I’d stand on the L train platform half a block down from the marquee. To occasionally see my name on the marquee is the most astonishing moment of this particular career path.

How did the concept for the All Rise tour come to you?
Oh, you know, we’re in a terrible malaise. Our society is in deep trouble. I firmly believe the vast majority of people in our country are good people but a large percentage are being gaslit by Fox News and by misinformation all because they long for our country to stay as racist and homophobic as possible. It’s a weird thing. I come from a small town in Illinois where people are like that. I love those people, and they’re good people. Given the mailaise that’s fallen over our civilization, I want to help us rather than hinder us. I do bits about racism and homophobia and white supremacy and toxic masculinity. I have a song about Brett Kavanaugh called “I Like Beer.” He’s the perfect example of what’s going on in our country. Rather than say, "There’s some trouble here and let’s do this decently and do it with fairness and justice," the establishment said, “This is annoying and we’re in charge. We’re just going to shove him onto the Supreme Court.” It’s so embarrassing. There are so many shameful moments like that. The idea of the show is instead of harping on what’s in the newspaper, it instead focuses on all of us. We’re all in this together. It’s understandable. These behaviors all come from tribalism. It’s like when the first tribe had to get the apples before the second tribe got them. And here we are.

The title is rather irreverent. What would you say to religious types who might take offense?
Oh, I don’t give a shit. I grew up in the Catholic church. I pursue a set of values that are considerably more Christ-like than the vast majority of fundamentalist Christians, who are completely okay with the death penalty and caging people at the border and separating families. It’s shameful — the people who hide behind some semblance of a religion. I don’t subscribe to a religion, but I will put my spirituality up against anyone in the world. I know what decency is about, and it has nothing to do with abortion clinics but everything to do with where we’re getting our oil. For one of the bits in the show, I do a tongue-in-cheek thing where I take on the attitude of a parent whose child comes out as gay. It’s a tongue-in-cheek take on how they might think about how terrible it is and how we need to fix this fucked up kid. I touch on the infuriating people who send their kids to church camp to pray the gay away as though you can pray yourself taller and as though it’s some kind of conversion therapy that can change the physical world, which is impossible. The people who would be upset by my show being called All Rise are the same people who would alienate and disown their children because of an antiquated attitude toward sexuality.

Talk about the podcast that’ll find you and your wife interviewing people from the confines of your bed.
It’s super fun. It reminds me of when you have a party, and everyone leaves but the last friend or two and you flop on the bed or the couch and talk. It’s been a fun night, and everyone has had a good time. Somebody fell in the pool. Suddenly, things have calmed down, and you have that deep existential conversation. That’s what it’s like. It’s literally recorded in our marriage bed. It’s a full spectrum across the rainbow of flavors. It veers into legitimate and substantial conversations about real world issues like bullying and addiction and prison reforms. It’s yet another on the list of my wife Megan’s brilliant ideas.

Making It seems like it’s lot of fun to host.
It’s a great privilege to host that show. I love to encourage people to make things. It’s part of good citizenship. We have a set of tools with which we can help improve the lives of ourselves and our loved ones. Consumerism fights against that. The corporations would prefer we stay in our pods and order things over the internet. If you make things for yourself, it makes you self-sufficient and aware of where your raw materials are coming from. To act as the [contestants'] sidekick and cheerleader is a really delicious thing to get paid for. I’m glad they saddled me with that job.

How much do you miss doing Parks and Recreation?
I don’t think about it much. It’s like, "How much do you miss playing softball in college?" It was the funnest thing you ever got to do. Now, it’s years ago, and you focus on how you can keep yourself out of the pub today.

How much time do you get to spend in your woodshop?
It’s sporadic. I’ve been touring a lot. I spent the last six months shooting a show for FX. I stop in for administrative visits at least a couple of times a month. I am looking forward to a couple of chunks of calendar next year when I can tell everyone to leave me alone, and I can finish up this batch of ukuleles I’ve been working on for awhile.