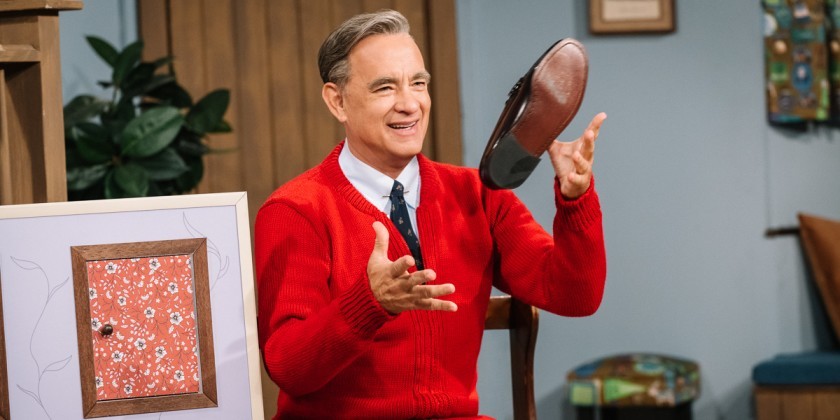 At the beginning of each episode of Mister Rogers Neighborhood, the PBS program that launched in 1968 and ran for decades, host Fred Rogers would walk into his home, change into a comfy sweater and ditch his dress shoes for sneakers as he asked, “Won’t you be my neighbor?” There was something assuring about his calm, cool and collected demeanor and the way he spoke so slowly and deliberately.

A Beautiful Day in the Neighborhood, the new Rogers biopic (of sorts), attempts to capture that magic, though the plot focuses more on the profile that Tom Jonud, a jaded journalist, wrote about Rogers for Esquire in 1998 as it does on Rogers’ life and career.

In fact, the film tells such a somber story that Not Such a Beautiful Day in the Neighborhood might be a better title. It opens area-wide on Friday.

The film begins with Fred (Hanks) welcoming viewers to another episode of his show but explaining to them that one of the neighbors, Lloyd Vogel (Matthew Rhys), is suffering. He displays a picture of Lloyd with a broken nose. It’s suggestive of the fact that Lloyd is in a dark place.

Cut to a wedding scene, and we see why Lloyd is injured. Lloyd and his father Jerry (Chris Cooper) exchange blows after Jerry says something disparaging about Lloyd’s wife Andrea (Susan Kelechi Watson). We don’t quite know who Lloyd is at this point, but we will.

A muckraking journalist with a reputation for writing not-very-flattering articles about his subjects, Lloyd has been in a rut, so his editor at Esquire assigns him a puff piece for a special issue devoted to heroes. She wants him to interview Fred Rogers and write 400 words about the guy. Easy enough.

“Don’t ruin my childhood,” says his wife, who admits to being a fan of Rogers. Lloyd goes to Pittsburgh and talks to Fred on the set of his show. All goes well enough, but Fred senses there’s something wrong with Lloyd, and, in typical fashion, sets out to heal the man. "You like broken people like me," says Lloyd at one point. Fred counters, saying, “We are trying to give people in the world positive ways of dealing with their feelings.”

Ultimately, Fred focuses on reuniting Lloyd and his father and ensuring that Lloyd also understands how to be a good husband and father, something Fred himself says he struggled with at times.

Both Hanks, who reportedly watched hours of the original TV program as well as the superb documentary film Won’t You Be My Neighbor, and Rhys give remarkable performances here, but the film clearly isn’t intended for children, and by focusing so much on Lloyd, it comes off as a rather awkward attempt to show just how unique the late Fred Rogers was.

A Beautiful Day in the Neighborhood is not showing in any theaters in the area.