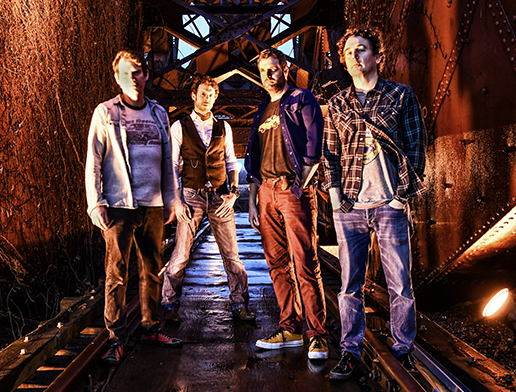 Earlier this year, the local indie rock Falling Stars released the single “Let It All Go” along with an accompanying music video in advance of a new EP. The EP is a “guitar-fueled affair with songs that celebrate defying the odds, running wild and standing strong.” The band recorded the four songs this past January at Youngstown’s Peppermint Studio with Gary Rhamy on the dials. Singer-songwriter Don Dixon (R.E.M., Smithereens) joined the sessions to produce the acoustic rock track “Black & White.” Expect to hear songs from it at tonight's show. (Jeff Niesel), 8:30 p.m., $8 ADV, $10 DOS. Beachland Tavern.

Since their debut album dropped in 2013, landing at No. 9 on the Billboard Jazz Albums charts, Moon Hooch hasn't stopped. With 2016’s Red Sky, written and recorded at an eerily serene Joshua Tree National Park during winter, the band continued to add in more electronic techniques (“Rough Sex”) and vocals (“On the Sun”). Drummer James Muschler grew up in the Cleveland area and went to Beachland shows prior to moving to New York. Tonight's show supports the band's latest releases, a series of singles. (Laura Morrison), 8:30 p.m., $18 ADV, $20 DOS. Beachland Ballroom.

Not just another indie pop artist with a hushed voice, L.A.-based singer-songwriter Sasha Sloan possesses a particularly well-honed sense of harmony and really sharp songwriting skills. She shows both those things off on her fine new album, Self Portrait. The disc’s opening tune, “Thoughts,” features fluttering electronics and soulful vocals, and “Dancing With Your Ghost” lets her put her soulful voice on display. A rising star, she'll likely play a much bigger venue when she returns to town after this tour. (Niesel), 8:30 p.m., $18 ADV, $20 DOS. Grog Shop.

Unlike other organizations that provide grants to artists, the Panza Foundation doesn’t use an application process to determine its recipients. Much like scouts for major league baseball teams, board members attend local shows to see which acts leave lasting impressions. To date, the foundation has awarded grants to 19 local acts. Bands such as Goldmines, Obnox and Ex-Astronauts have received grants, and by next year, the foundation will have given out a total of about $32,000. To mark the foundation’s fifth anniversary, this year’s recipients will perform at tonight’s benefit concert that takes place at the Happy Dog. The show will acknowledge the milestone, and it’ll feature performances by Harvey Pekar, Punch Drunk Tagalongs, Cotton Ponys and Joey Sprinkles. At the event, the foundation will also announce 2020 grant recipients, and there will be a raffle for musical equipment. Some 32 items will be raffled off, valuing about $5000. Local recording studios and a local pilates studio have made donations too. (Niesel) 7 p.m., $10. Happy Dog.

A staple in the Cleveland blues scene — and in the American music circuit writ large — Travis “Moonchild” Haddix has always brought the heat to the stage. He also surround himself with great musicians — like a tight, tight brass section. What he has always done so well has been his steady merger of classic blues structures with smooth R&B-style singing. He makes the blues accessible to anyone willing to listen and, inevitably, dance. And having been playing guitar since he was 7, the dude can tear it up quite nicely. He once told a music writer, “I am the best that I can be, and since no one else can be me, there’s none better.” Right on. (Eric Sandy), 7 p.m., $8 ADV, $10 DOS. Music Box Supper Club.

Although the Jayhawks first emerged from the same Minneapolis scene that gave us the Replacements and Husker Du, the group played a different style of music with tunes steeped in roots/country-rock and power-pop. Recently, the Jayhawks reissued their first five major label recordings on vinyl through American/UME. For the first time, 1992’s Hollywood Town Hall, 1995’s Tomorrow the Green Grass, 1997’s Sound of Lies, 2000’s Smile and 2003’s Rainy Day Music are all available on wax. While frontman Gary Louris says he’s not one to dwell on the past, he’s said he's still proud of the albums, which marked a shift away from the alt-country sound for which the band was known. They were recorded after the departure of founding member Mark Olson, who shared songwriting duties with Louris. (Niesel), 8 p.m. Music Box Supper Club.

Released in 2013, the Rumpke Mountain Boys' Moon is a great album. The strings are top notch as always, and the attitude is fresh and laid back. “Cincinnati Moon” is a nice little song, cleaving the Ohio River duality of north and south. From down in Southwest Ohio up here to the Northeast, the band’s got a lot of good to deliver. Their shows promise high-energy bluegrass and plenty of dancing for those who’ve got the itch. Here’s a parting drop of Rumpke perspective: “Doin’ wrong feels as good as being right, especially when I’m high as a kite.” We couldn’t agree more. (Sandy), 8:30 p.m., $12 ADV, $15 DOS. Beachland Ballroom.

For more than 50 years now, the Temptations have continued to tour and record. Part of the original Motown machine, the group began in the early ’60s and struck gold with the Smokey Robinson written-and-produced “The Way You Do the Things You Do,” a snappy R&B/soul number that showed off their tremendous harmony vocals. They followed the tune up with tracks such as “My Girl,” “It’s Growing,” “Since I Lost My Baby” “Get Ready,” “Ain’t Too Proud to Beg,” “Beauty Is only Skin Deep” and “I Wish It Would Rain.” Expect to hear these songs and more from this retooled lineup. (Niesel) 7:30 p.m., $34.50-$65. MGM Northfield Park.