Indie Rockers Common Holly, Who Play the Beachland on Tuesday, Take a Look Outward on Their New Album 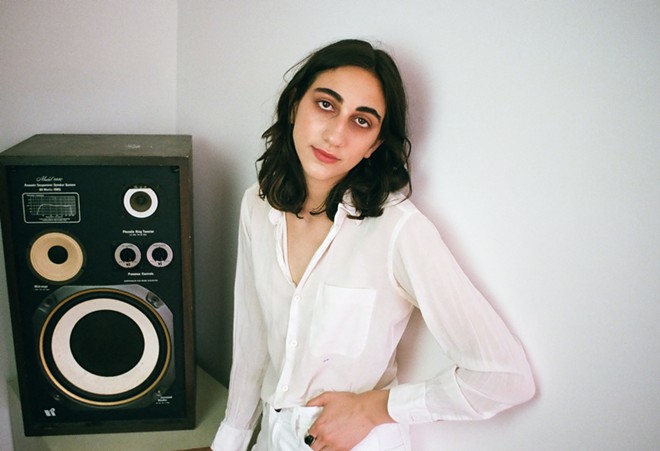 Given that singer-songwriter Brigitte Naggar, who records under the Common Holly moniker, was born in New York but grew up in Montreal, it makes sense that she initially gravitated toward Canadian artists.

“I listened to a fair amount of singer-songwriter stuff,” she says via phone from her Montreal home. She performs with Bebe Machete and Kid Tigrrr at 8:30 p.m. on Tuesday at the Beachland Tavern. “I was really into Metric and Emily Haines for most of my young teens, and I also got into Feist, who is a Canadian hero. I also like older ones like Neil Young and Joni Mitchell. I had some influence from my dad, who liked Dire Straits and J.J. Cale. He also liked fun ’60s bands from France. He’s from France and wanted to make sure that we got some of that in our system as well.”

Naggar received her first acoustic guitar at 16 when her dad surprised her with it.

“I started writing on that,” she says. “I’m 27 now, so it’s been about 11 years.”
Initially, she published some songs on MySpace before settling upon the moniker Common Holly.

“That came from a series of brainstorms,” she says when asked about her band’s name. “I think it began at a party where people were going around in a circle and talking about what kind of imagery went well with the music. We ended up on plants, and I did some research on plants. I liked the sound of Common Holly. It’s that Christmas plant you see around. I thought the imagery was cool. It’s pretty red berries enshrouded in these dark, sharp leaves. There’s a cool parallel there with the music and the aesthetics of the music.”

“I don’t know if it’s [really the first song I ever wrote], but that’s what I remember being my first song,” she says. “For the album version, we changed it up a fair amount in terms of how it’s performed, and that’s what justified re-recording it and using it on the album.”

The press release for Playing House describes it as a “look inward” to differentiate it from her new album, When I say to you Black Lightning, a “look outward” that offers “an exploration of the ways in which we all experience pain, fear and self-delusion, and how we can learn to confront those feelings with boldness.”

“Yes, that first record was a look inward, and the new record is meant to be the opposite,” she says. “In talking to people, it has become more clear to me that, making the second record, there was a new awareness that people might be listening to it and there might be an audience I might not have had the first time around. It was kind of blissful and unknowing with that first record. This time, I’m not famous or anything, but there’s more of an audience. Knowing you have an audience has changed the way I write. Maybe it’s not so interesting to write about yourself for other people.”

Naggar says she meant to record the entire album at her mother’s cabin, but things didn’t go as planned.

“We did two sets of a week and a half there,” she explains. “Myself and my producer Devin [Bate] drove all our gear up there and set up. Then, we weren’t done yet, so we had to piece it together from various places. We used a friend’s studio and Devin’s bedroom.”

The opening track, “Central Booking,” features whisper-thin vocals and an undulating guitar riff that makes it sound like a cross between Suzanne Vega and Cat Power.

“There were a few things that inspired it,” she says of the track. “It’s slang for jail. I came upon someone in the last few years who spent the night in jail, and they were a person with various difficulties. Their story inspired the music. You start somewhere and go wherever the song takes you, so it’s not biographical, but it definitely started there.”

“It’s something that someone said to me once,” she says when asked about the tune’s inspiration. “I thought it was so devastatingly relatable and so much so that it was enough to base a song around. It was meant as a joke, and it came out in about five minutes. I sent a demo to [producer] Devin [Bate] as a joke, and then I started performing it. It seemed like people related to it, so I thought it should be on the album. It’s my travel classical guitar. It sounds like a bass ukulele. It has nylon strings, so it sounds like a weird ukulele.”

Naggar says her live show rocks a little harder than her two albums.

“It’s a bit heavier,” she says. “It’s more of a rock formation. It’s alternative rock and takes some of the hardness and rawness from the album, and we haven’t incorporated any electronics yet, but my guitarist has a crazy number of pedals.”

She’s uncertain, however, if the live show will influence the next album.

“It’s kind of something I ask myself a lot,” she admits. “I wonder how close the live record and the album should be. I think part of the creative process is being able to embellish the album in the studio, and the live show is about being able to present the performance as the best way to perform it. The record is the best way to listen to it from home. Those are two different experiences. [The next record will probably be] more of the same but maybe have slightly more of the live energy.”