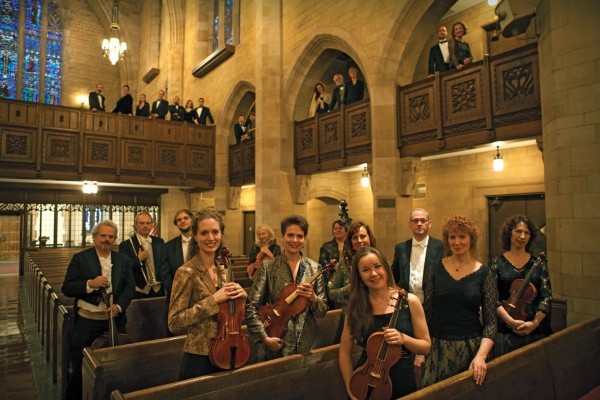 Apollo’s Fire welcomes guest conductor Julian Wachner of Trinity Church, Wall Street, for performances of four of the six cantatas that make up J.S. Bach’s Christmas Oratorio. Originally performed in Leipzig one at a time on Christmas Day and the five days that followed, the first and last pair of the cycle make a festive group for Apollo’s Fire’s Singers and Orchestra. The fine quartet of soloists includes Molly Netter, soprano, Daniel Moody, countertenor, Stephen Soph, tenor, and Jesse Blumberg, baritone. Festivities begin on Wednesday, December 11 at St. Noel’s in Willoughby Hills, and continue on Thursday at St. Paul’s in Cleveland Heights, Friday at the Cleveland Museum of Art, Saturday at First Baptist in Shaker Heights, and Sunday afternoon at St. Raphael in Bay Village. Tickets can be reserved online.

The Cleveland Orchestra opens its Christmas cornucopia with a live performance of Dimitri Tiomkin’s score to Frank Capra’s film It’s a Wonderful Life (with movie on the big screen) on Thursday, December 12 at 7:30 pm. Vinay Parameswaran conducts. Then the first of a series of Christmas Concerts featuring the Severance Hall and guest choruses conducted by Richard Kaufman and Lisa Wong begins on Friday, December 13 at 7:30 pm. See our Concert Listings for details and order your tickets here.

Can you believe it that in 1951, NBC commissioned a made-for-television opera? That’s when Gian-Carlo Menotti’s Amahl and the Night Visitors became part of the American Christmas tradition. Cleveland Opera Theater will produce three performances of the heart-warming story, staged by Megan Thompson and conducted by Domenico Boyagian on Friday, December 13 at 7:00 pm (Old Stone Church), Saturday, December 14 at 7:00 pm (Church of the Savior, Cleveland Heights), and Sunday, December 15 at 3:00 pm (Rocky River Methodist Church). Admission is free with a monetary donation to the City Mission to benefit Laura’s Home, the Mission’s Crisis Center.

Two concerts have nothing to do with Christmas, but will interest lovers of string chamber music.

And the Cavani Quartet will celebrate Beethoven’s Birthday on Sunday, December 15 at 4:00 pm with a performance of his Quartet, Op. 130, and the Große Fuge in Glick Recital Hall at The Music Settlement. Admission by freewill offering.

Back to Christmas: Burning River Brass will return to Pilgrim Church in Tremont on the Arts Renaissance Tremont series for a pair of Christmas concerts on Sunday and Monday, December 15 and 16 at 7:00 pm.

And what would Christmas be without the opportunity for do-it-yourself Messiah Sings? There are three that we know about this season, beginning on Sunday, December 15 with the Master Singers Chorale at 3:00 pm at First Congregational Church in Akron (Edward Arthur Shure, conducting, with Kent State student vocalists, brass, and organ). No. 2 takes place on the 15th at 7:00 pm in Finney Chapel at Oberlin when Peter Slowik conducts vocalists and instrumentalists from Oberlin Conservatory and Credo Music alumni. No. 3 is scheduled for Thursday, December 19 at Noon at Trinity Cathedral in downtown Cleveland, with Todd Wilson conducting Trinity Chamber Orchestra and soloists. Bring your scores and lift your voices! Freewill offerings will be received at all events. Non-perishable food items for the church pantry will be collected in Akron, and the Oberlin offering goes to the Neighborhood Alliance’s Haven Center.

For details of these and other classical concerts, see our Concert Listings page.