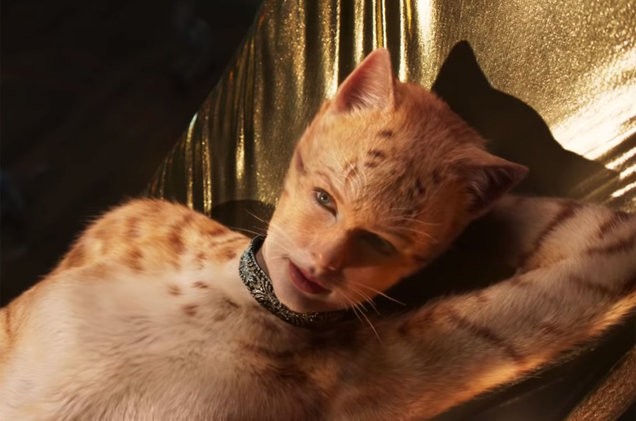 There was probably a time and place when it made sense to turn Cats, the musical that made its debut in 1981, into a theatrical release.

But that time and place has placed. Even though the musical continues to draw crowds wherever it plays, the songs and storyline in the Andrew Lloyd Weber play clearly feel dated and don't cry out for a cinematic adaptation.

But that hasn't stopped Hollywood from trying, and Cats shows at select theaters tomorrow night and opens areawide on Friday.

The movie centers on Victoria (Hayward), a white cat who, after losing her father and mother, bonds with a group of cats hanging out in a criminal hideout in London's grunge-y sewers. Casting Hayward, the principal dancer in the Royal Ballet at Covent Garden in London, in the lead role was a brilliant decision by director Tom Hooper (The King's Speech, Les Misérables, The Danish Girl). Her dancing brings a real vibrancy to the part, and the physically fit actress/dancer looks great in the somewhat-creepy motion-capture suit that the characters all don.

Victoria quickly learns that her newfound feline friends fear a certain Macavity (Elba), who has imprisoned Demeter (Daniela Norman) and threatens the rest of the cats too. The cats cling to a hope, however, that they can be reborn into a new life after performing at the annual Jellicle Ball.

Tradition has it that Old Deuteronomy (Dench) chooses the cat that gets to float away, but Macavity throws a wrench into the festivities when he whisks Deuteronomy away in a shower of sparks and has her locked up on an old ship with Jennyanydots (Rebel Wilson) and Buster Jones (Corden).

In one of the film’s best moments, Mr. Mistoffelees (Laurie Davidson) tries to bring Old Deuteronomy back by using his magical powers. His song and dance routine is one of the film’s few segments that sparkles, particularly at the song’s conclusion when Mistoffeless floats into the air while shuffling a deck of cards.

The film’s other magical moment comes as Grizabella the Glamour Cat (Jennifer Hudson), an outcast, sings “Memory” in front of Deuteronomy and the cats to try to win them over. Hudson’s operatic vocals give the song its power even if the cheesy synths make the song sound rather dated.

In the end, Cats just seems like the movie-based-on-a-musical that no one asked for. While the end of the year usually brings with it at least one Oscar-nominated musical, this ill-conceived movie isn't likely to rake in any significant awards.