Twenty-nineteen has been an exhilarating year in filmmaking. Here are our picks for the best movies released in the U.S. this calendar year.

I welcome quibbles and disagreements. But for the record, I've not seen several titles that are receiving wide critical acclaim, including the following: The Lighthouse, The Souvenir, American Factory, Portrait of a Lady on Fire, Pain and Glory, A Hidden Life, Honeyland.

I rate movies on a 25-point scale, weighing merits of the script, the performances, the visual effects, the production design and the cultural impact. Many of the films below scored a 22 on my rubric (as reflected in parentheses), as did several others that just missed this list. Those "Honorable Mentions" include: Little Women, Ford V Ferrari, Once Upon a Time in Hollywood, Us, Uncut Gems and Ash is Purest White.

Show me someone who saw Knives Out and I'll show you someone who had a hell of a good time at the movies. Rian Johnson's masterfully plotted whodunit has all the pizzazz of an Agatha Christie murder mystery with none of the hackneyed plot twists. With its decadent mansion setting, blistering script, and riotous ensemble cast, Knives Out proves that even with familiar ingredients, genre films can still delight and surprise. 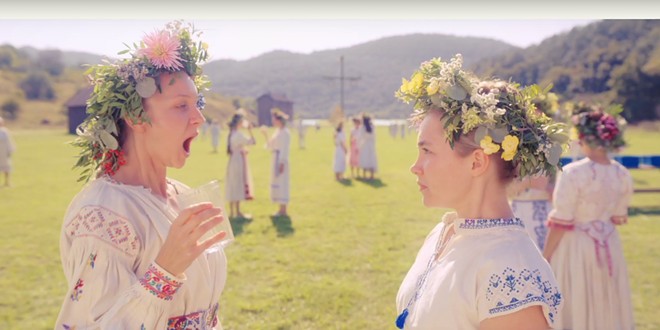 Florence Pugh, who can now be seen rapturously reinventing the character of Amy March in Greta Gerwig's Little Women, delivered one of the most searing performances of the year in this summer's Nordic horror stunner Midsommar. After an unthinkable tragedy upends her world, Pugh's character Dani travels with her boyfriend and his grad-school buddies to Sweden for a cultural festival, which include such festivities as ritual suicide and the consumption of orgy-inducing tea. Director Ari Aster has created an unlikely milieu of daytime terrors in this nervy follow-up to last year's Hereditary. Led by Pugh (NOMINATE HER!), the film is knotted with tension, anxiety and grief.

(Scene review by Sam Allard, 7/2/19: [Aster] now almost seems to be testing himself. How scary can he make something without the psychological reinforcements of nighttime and the terror it evokes? The answer: very.)

Lulu Wang's script, "based on a real lie," pinpoints and unearths not only the comedy but the humanity in the dark circumstances it adapts: a family's collective decision not to tell their matriarch that she's dying of cancer. Gathering from Japan and the United States, two brothers and their families plan a slapdash wedding as a ruse. They're really all there to bid 'Nai Nai' adieu. Starring Awkwafina as a 30-year-old writer entangled in the emotional net that her childhood immigration and her grandmother's physical condition have woven, the film depicts family and culture in new and brutally honest strokes.

(Scene review by Sam Allard, 7/31/19: A masterful family comedy ... often laugh-out-loud funny as it explores both geographic and generational divides.)

Jennifer Kent, in this brutal frontier drama, tells a pitiless story of revenge that exposes the futility of vengeance. Not only does it document the barbarism of settler-colonialism — here in the island nation of Tasmania, off Australia's southern coast — but it honors and contextualizes the experience of indigenous people there. All three leads are magnetic in their own right. Sam Claflin, who plays a brutish Captain on a military outpost, is a poster child for the toxicity and violence of entitled white masculinity. He's the year's most despicable cinema villain.

(Scene review by Sam Allard, 8/28/19: powerfully acquaints audiences with the pain of victims and the desperation and rage for which vengeance can often seem like the only antidote ... a gripping, harrowing film that packs either the strongest or second-strongest gut punch of the year.)

Mark Ruffalo would be a shoe-in for an Academy Award nomination in virtually any other year, but this year's abundance of stellar lead performances means he may take a backseat. In Dark Waters, he plays Cincinnati attorney Robert Billot, who more or less single-handedly takes on the chemical giant DuPont for the ongoing poisoning of a West Virginia town. It's a gripping David vs. Goliath investigative story with much more narrative horsepower than the season's other investigative film, The Report. It's also a refreshing, if often grim, portrayal of Appalachia.

(Scene review by Sam Allard, 12/4/19: Haynes directs the hell out of his cast and creates a cinematic experience rich in visual and narrative pleasures even as it conveys an infuriating true story.)

It's District 9 meets Widows meets The Battle for Algiers. It's the heart-pounding story of a ragtag band of Chicago insurrectionists plotting guerrilla warfare against an alien occupying force. It's an intricately plotted sci-fi political thriller from the guy who brought us The Rise of the Planet of the Apes. It's got John Goodman! It's got plot twists! It's got gritty urban realism! It's rigorously intellectual, but not at the expense of its entertainment value. It's a celebration of community and neighborhood bonds. It's a stirring, vastly underappreciated, criminally under-promoted cinematic gem.

(Scene review by Sam Allard, 3/14/19: a pulsing, subversive story invigorated by a powerhouse cast ... a fire of a film that burns bight and hot long after viewing.)

A story of class tension and wealth inequality as imaginatively told as anything in cinema history. Bong Joon-ho's film, which won the Palme D'or at the 2019 Cannes film festival, begins as a satirical comedy in which a destitute family cons their way into work for a rich family. But midway through the film, it takes a hard left turn into thriller territory, showing how desperation borne of poverty turns poor families against each other. Laser-focused production design and a dramatic score turn what would already be an unforgettable story into an indelible cinematic experience.

The best sci-fi film of the year concerned with bloodlines and the dark side is not, with apologies, The Rise of Skywalker. And the best film of the year starring Brad Pitt is not Once Upon a Time in Hollywood. James Gray's engrossing tale of an astronaut tasked with traveling deep into the solar system to retrieve his brilliant, deranged father (Tommy Lee Jones) is as vivid and haunting a vision of space travel as has yet been produced. It does for the colonization of outer space what Apocalypse Now did for the War in Vietnam. A triumph of sci-fi realism.

(Scene review by Sam Allard, 9/18/19: A daring, wondrous space epic ... a magnificent and mysterious film ... one of the most fully-realized near-future visions ever achieved on screen.)

Mr. Baumbach's opus, with career-defining performances from both Driver and Johansson. A brutal, tender, forensic portrayal of the contours and complexities of love.

A monumental piece of filmmaking, every bit as breathtaking from a narrative perspective as it is from a technological one. All hail Cinematographer Roger Deakins and Dunkirk editor Lee Smith, who have created a heart-pounding, virtuosic masterpiece in which the entire film plays out in (what appears to be) one continuous shot. It's an absolute marvel. I'm honestly having a difficult time refuting the notion I stumbled upon during my jaw-dropping viewing: that it's the greatest war film ever made.
***