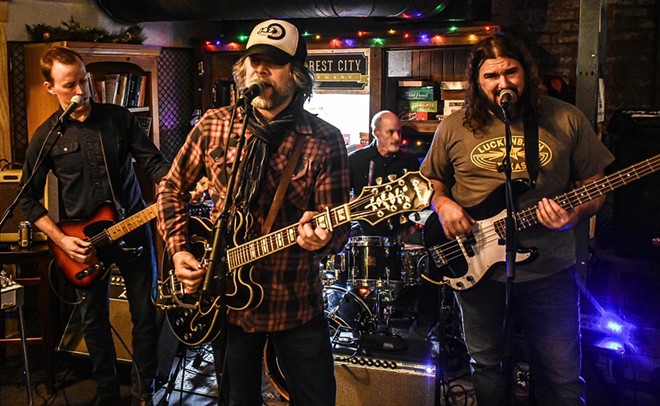 Ten years ago on what local singer-songwriter Brent Kirby calls a drunken dare, a group of Cleveland friends and musicians showed up at the Happy Dog to play a couple sets of tunes by the late, great Gram Parsons. Dubbed the New Soft Shoe, the group has been at it ever since, spreading the gospel of what it refers to “Gram's Cosmic American Music.”

“The New Soft Shoe started playing Gram’s songs for fun.” Kirby says in a press release. “We really didn’t have a plan to be around for 10 years, but it became a monthly tradition for the band and our audience. The music has connected us with people all around the country.”

The group, which currently holds down a monthly residency at Forest City Brewery, will celebrate its tenth anniversary with Thursday’s show at the brewery.

The group only plays songs that Parsons once played and performs the songs with their own unique arrangements. Four of the members take turns singing lead vocals.

Expect to hear tracks by groups such as the International Submarine Band, The Byrds, Flying Burrito Brothers. The band has also traveled and performed on various stages such as the Gram Parsons Guitar Pull in Parsons' childhood home of Waycross, GA, the Rock & Roll Hall of Fame, and other great venues throughout Ohio.

The New Soft Shoe will continue its residency at Forest City Brewery for 2020 on the second Thursday of every month. Admission is free, and the music begins at 8.