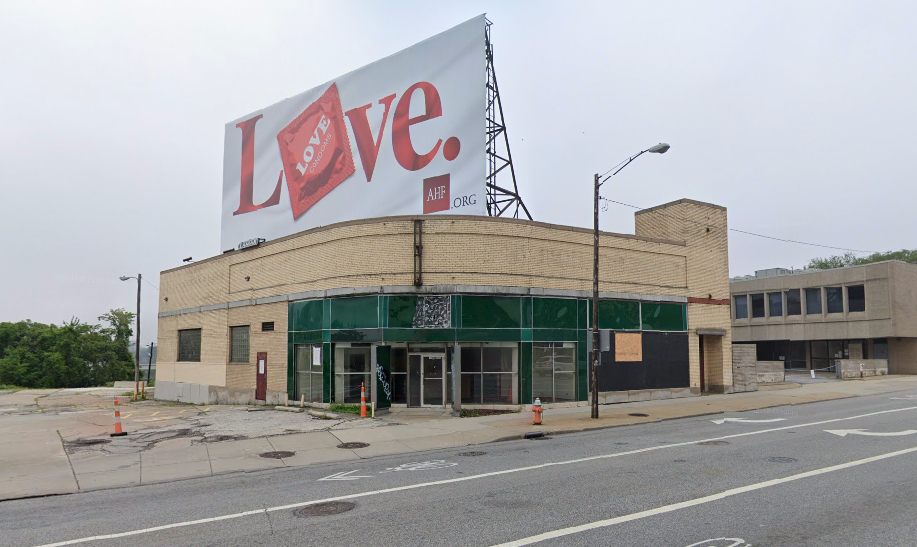 Nearly $40 million has been secured from various sources toward the project, which was granted glowing approval from the Cleveland Planning Commission in Sept. 2017.

The Port of Cleveland — which along with LAND Studio, the city of Cleveland, Ohio City Inc. and dozens of other private and non-profit agencies, is guiding the vision and execution for the 23-acre park and attendant stabilization of the Cuyahoga River hillside, critical to some $3 billion in transportation and shipping along the corridor — has awarded a $3.4 million contract to Osborn Engineering to create the construction drawings for the stabilization work. In 18 months, contracts could begin being awarded on that front.

Also, as of the end of 2019, the coalition has acquired control of 94 percent of the needed land for the park. 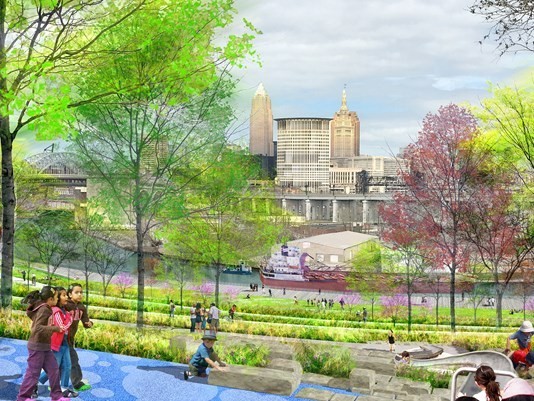 One of the parcels it does not control is the long-dormant building on the corner of West 25th and Detroit. That structure, a former Royal Castle fast food chain location that has been vacant for nearly two decades, was purchased by restauranteurs Bobby and Tony George through their Mortgage Investments company in June of 2018 for $248,000.

That was surprising news for two reasons. First, the parcel was to be included in the park, a fact that was widely shared with stakeholders in Ohio City through outreach efforts. In theory and design, that corner on the western edge of the Detroit-Superior bridge would house a welcoming center (top right in the diagram below). 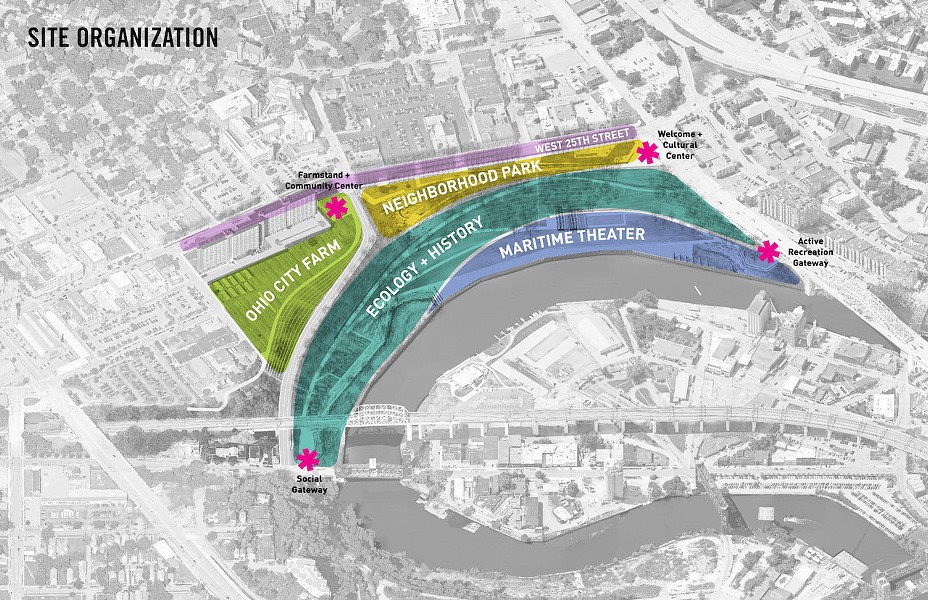 Second, part of the reason the building had sat vacant and for-sale for years was because of significant geotechnical issues regarding the hillside that meant any development there would be both difficult and expensive. Prospective buyers who inquired in recent years backed away both because of that problem and because they were made aware of its future as part of the park.

Neither of those facts stopped Bobby George, who told Crain's Cleveland in June 2018 that he had no idea the parcel was in the park's design.

"I love the property. I love the view. I have had a lot of interest from some pretty cool tenants in the building or may do something myself there," he told Crain's at the time. "We're also in the billboard business and have people interested in that location as well. Or we may redevelop the site. I don't want to be obstructionist. I hope they work with me to move the billboard or allow me to cooperatively develop the site with the park. I love what they are doing. I don't understand why they didn't buy it. It was not hard to close the deal with the seller."

In the ensuing months, conversations between the Georges and the park coalition began. According to people familiar with the discussions, the Georges had offered to sell the parcel back to the park coalition for ten times what they paid for it and, later on, proposed receiving parcels in Ohio City in a land swap in exchange for the lot. This, according to those familiar, lent great credence to the belief that Bobby George knew full well what he was doing by strategically inserting himself with the purchase. This was a flip.

Around the same time, David Bowen of Richard Bowen & Associates, who also happens to be the Chairman of the Cleveland Planning Commission, had made calls on behalf of the Georges. Bobby George told Scene that Bowen, who he called a "great guy," had called on parcels around the building the Georges had bought to see if they could increase the footprint.

The problem there was twofold. For one, observers questioned why Bowen, a mayoral appointee to the planning commission that had so favorably approved of the park project — including Bowen himself who said of the park at a planning commission meeting, "I find it very attractive, there's no doubt about it," — and of which the city itself was a key partner, would be working seemingly against the park's interests.

Secondly, those surrounding parcels were also slated to become part of the park, including the parking lot next to Bobby's building, which is owned by Cuyahoga County, who has pledged to transfer ownership to the coalition. (Incidentally, according to multiple people, Bobby George at one point allegedly leased those County-owned parking spots to the Ohio City Galley for its valet parking until it was brought to the attention of the Galley that he didn't actually own the parking lot.)

Bowen, in a brief and awkward conversation with Scene, deflected any criticism of his involvement.

Asked to clarify what that meant, Bowen said if Bobby developed the parcel to complement the park, that would be good. And that, "If he did something and it came before planning commission, obviously I would recuse myself from voting. But Bobby buys lots of property. It's a solid, good building. And I don't think he knew about the park."

More than a year after the purchase, nothing much has changed at the building besides updates on the billboard, which is a revenue-producing aspect that the park coalition would likely have to account for if it attempted to buy the building back from the Georges or otherwise come to an agreement.

But, those conversations have ended for now, Bobby George told Scene. And that solid, good building would come down to make way for his future project.

"We have development plans now, but I can't release them or say much because the potential tenant — and we have multiple tenants, one major tenant — is under a confidentiality agreement," he said. "But we're finalizing our development plan. I've tried to reach out to [the park coalition] because I wanted to work within their plan. I don't want to be an obstructionist. I'm not going to do anything that's bad for the city. I'm not going to do anything, number one, that doesn't make money, but second that also doesn't represent my family. I think it will fit within the project."

And he stands by his quotes that he didn't know about the park. And as for anyone who doesn't believe him...

"It's one of two things. Either I'm a liar or I'm telling the truth," George said. "What am I going to say? Call me a liar. The fact of the matter is that property had been sitting there for years and when I went to buy it... actually to be honest, when we first looked at it I was going to put a marijuana dispensary there."

That couldn't happen because it was within 500 feet of a park or church. But he still wanted the property, and he doesn't see the geotechnical issues as a problem like others. Instead of building a bigger footprint, he said, they're just going higher, though he won't say how many stories.

"We've had engineers go out and we have to do some reinforcement, but it's nothing compared to the scope of the project, which is a prime use of real estate," he said. "I just don't have a timeframe yet. But I'd be more worried about [the park coalition] starting work than me starting work."

Observers are doubtful on that last point, specifically given Osborn Engineering's ongoing study of the hillside for the park, but also because the lot in question, separate from the geotechnical issues, is about 50-feet wide and has literally no room for parking, which would mean getting a variance from the city. (As Ken Prendergast noted, if they got denied, they could just sue the city and get paid.)

For now, there's other work to be done, and down the road, if and when eminent domain takes center stage in the conversation, courts tend to side with parks over development projects, especially when there's a good chance the developer knew of the impending park project. The city itself, especially under Mayor Jackson, would be loathe to use eminent domain, but the port could. Even then, it's an expensive and lengthy process. The park coalition, some think, would be better off simply upping an offer to the Georges. Because while a complement project with a cafe or some other business at the tip of the 23-acre park would be acceptable, a vacant, derelict building would not.

"If they want to work with me, they gotta move," Bobby George said. "I would always have a conversation. If you're walking into this, my side's the truth. I was willing to work with them, but they wanted me to essentially just hand it over. I'm not a socialist."

"When we began our work there were over 20 parcels of land owned by 14 different property owners. Our coalition has been creative and worked with each individual property owner to find some value and meet their needs. Many property owners have agreed to donate their land to help be a part of the solution, in exchange for the tax benefits of the donation. Others have been acquired by grant sources secured by LAND Studio for an appraised fair market value. Today through one of our non-profit partners, West Creek Conservancy, our coalition controls over 94 percent of the hillside.

"The initial engineering report, funded by the Port of Cleveland, found that while existing buildings on the top of the hill could remain, it would be better for slope side stability if they were removed. That, along with a tremendous amount of public input, is one of the many factors that shaped the vision plan that we are working to bring to life. While the door to have their property become a part of the Irishtown Bend Riverfront Park is certainly still open, we've also let them know that if they feel they can redevelop their land within the limits of the law, they are welcome to do so."

As for Bobby's worry about the park getting started, McNair said: "This park will help link together a growing network of trails that stretch from Edgewater Park to New Philadelphia, and simultaneously tie our neighborhoods to their historic riverfront. The question is not whether or not the Irishtown Bend Riverfront Park is going to become a reality. The question is whether or not our coalition can follow through with the world class vision that we worked with so many in Northeast Ohio to create. We look forward to showing everyone that the answer to that question is unequivocally yes."