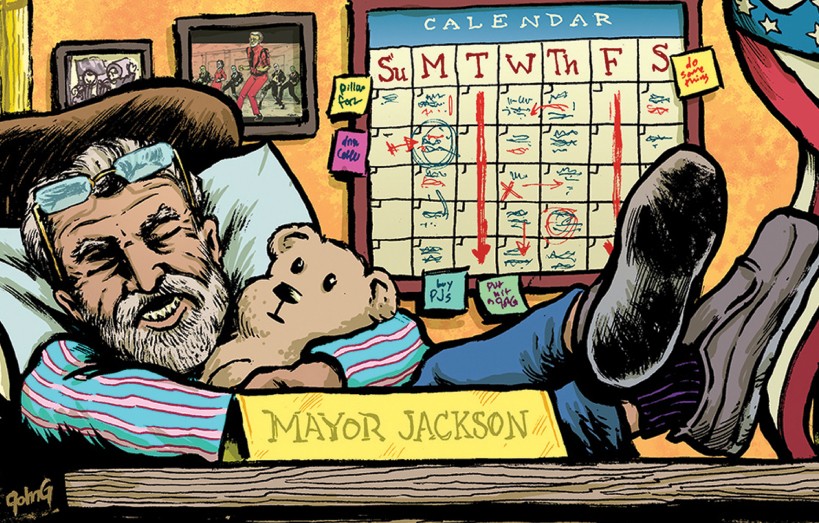 Mayor Frank Jackson has not attended a single weekly meeting of the Board of Control since May 28, 2008. The Board of Control (BOC) is the body which governs the city's division of purchases and supplies. It ensures "fairness, transparency and best value" in the authorization of competitively-bid purchases for the city.

The meetings appear every week in Jackson's calendar and sometimes last only minutes, but he never attends. The BOC meets either 50 or 51 times annually — they have not typically met the first week of the year, including in 2020 — which means that Jackson has missed more than 590 consecutive meetings.

These absences, reflected with crystal clarity in the lately updated City Record, once again call into question how the Mayor occupies his time. (In 2019, Scene reported on the Mayor's calendar in 2017 and 2018 to show how he had all but disappeared from public life.) They also demonstrate that Jackson's lethargy and inactivity are not aberrations of his fourth term. He hasn't bothered to preside over these meetings in more than a decade.

The meetings are these days overseen by Law Director Barbara Langhenry. A city spokesperson told Scene that it was "common practice" for the Director of Law to serve in the capacity of BOC chair.

That practice was indeed common in the past. Both Mayors Jane Campbell and Mike White attended roughly 50 percent of the BOC's meetings during their tenures, the City Record shows, and their law directors routinely served as alternates. But Jackson has abandoned the weekly responsibility entirely.

The City Record shows that Jackson's attendance gradually dropped through his first term. In 2006, his first year in office, he attended 32 of 51 meetings (63 percent). In 2007,  he attended 21 of 51 meetings (41 percent). In 2008, he only showed up for seven of the year's 51 meetings (14 percent), with his final appearance coming in May. He hasn't bothered to attend since, which means he did not officially advise or vote on city purchases even once during his second, third and fourth terms in office. Many of these pivotal purchasing decisions occurred during and after the height of the Great Recession.

It has been an unchallenged talking point that Jackson's careful and prudent leadership is what kept the city afloat financially during those trying years.

He was "a great steward of Cleveland finances at a challenging moment when the Great Recession made Cleveland Ground Zero in the foreclosure crisis and state officials were slashing budget support to Ohio cities," cleveland.com opined in their most recent Jackson endorsement editorial.

But Jackson, the steward in absentia, was clearly less hands-on than previously thought.

The city's spokesperson had no answer or explanation for Jackson's decade-plus run of consecutive absences. Instead of answering our questions, a generic emailed statement advised us that the BOC's meetings are "open to the public and are held regularly every week to take action on its agenda items."