Greensky Bluegrass Delivers a Heater on a Cold Night in Cleveland 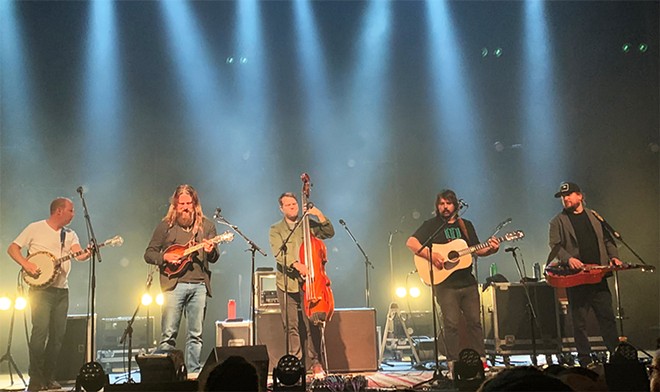 Last time Greensky Bluegrass brought some heat to cold, cold, Cleveland, they drew up a setlist based on the absurd evil squatting in Washington, D.C., serving up a setlist that dobro player Anders Beck called the Greensky State of the Union. It was a straightforward political statement, something that needs to be stated from time to time in this unsettling century of ours. Other times, though, you’ve just got to chill out and play some music with your pals in the audience.

At the Agora last night, those of us who trekked through blustery winds got a terrifically fun evening of psychedelic Americana and five-part improvisatory beauty. It’s always a blast seeing Greensky in Cleveland.

The first set featured a lively “Stop That Train” before hopping around a few different eras in the band’s history, including the latest album, 2019’s All for Money. The leadoff track from that album, “Do It Alone,” got a nice performance before the band ducked into a splendid, fiery “Living Over.” I tended to watch Anders Beck on the drop steel during the longer jam segments. His unique instrument is sort of a calling card for Greensky’s brand of improv, and he seemed to be in fine form last night. A lot of the more creative dynamics bounced between Beck’s slide work and Michael Bont’s light-speed banjo picking. “Living Over” brought the business.

The lights were excellent, and lighting designer Andrew Lincoln never lingered too long on the flashier aesthetics—strange patterns that would swirl hypnotically behind the band. He kept the kaleidoscope spinning. My travel companion pointed out that the band leans heavily into the spacier side of the great jam band landscape—much more than traditional, bucolic bluegrass—and this is certainly one of the great points of appeal here. If you know, you know. Greensky dives into the deep end, making them one of the more exciting bands to catch on tour these days. We’ve been saying this for years at Scene, but it seems like they just get tighter with each trip back to Cleveland.

“I see us as two bands in one,” Beck told Scene earlier this month. “There’s the live band, which is an improvisational jam band. We rock and take chances, and songs might be 20 minutes long. There’s the studio side of the band. I think we’re strong on both sides. There’s great songwriters in the band. Creating albums is really fun, and with our last album, that’s the closest we’ve come to merging the live side with the studio side. It’s almost like we were writing a setlist for a show.”

And, yes, absolutely, the new stuff shined onstage last night. All for Money sees the band stretching their legs a bit more in the studio setting—longer songs, deeper instrumental sections, etc. At the Agora, with a packed house enjoying the moment before them, they ripped into “What You Need” to start the second set, giving us a glimpse of what this tour means to the band and how they continue to develop as musicians. Throw in a piquant “Nellie Kane” cover and a few sprawling jams in “I’d Probably Kill You” and “Kerosene” (with a nice callback in the encore slot), and you’ve got the makings of a fine evening with a great band.

Set 2: What You Need, Clinch Mountain Backstep, Nellie Kane, In Control, Last Winter in the Copper Country, I'd Probably Kill You, Hit Parade of Love, Forget Everything, Road to Nowhere, Kerosene

Encore: That's How Strong My Love Is> Kerosene