Documentary Film 'I Am Human' to Have Its Cleveland Premiere on Jan. 30 at the Hanna Theatre 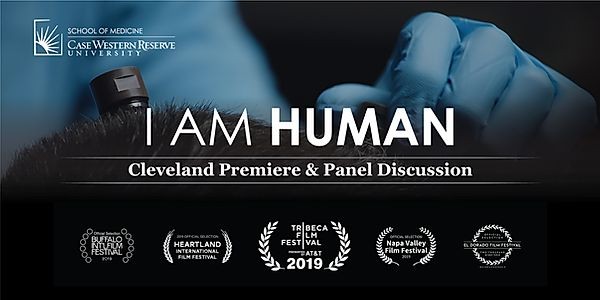 I Am Human, a documentary film chronicling the journey of a paralyzed Cleveland veteran and the doctors and researchers who helped him regain control of his hand and arm, will screen at 6 p.m. on Thursday, Jan. 30, at the Hanna Theatre at Playhouse Square.

According to the press release about the movie, Kochevar, who was paralyzed below his shoulders in a bicycling accident, is the first person with quadriplegia to have arm and hand movements restored with the help of two temporarily implanted technologies.

The film explores “the medical, personal and ethical questions that arise as human and artificial intelligence become one as a means to fight disease or overcome injury.”

“I believe that we can harness the power of the brain and harness the power of computers to overcome some of the most critical limitations we face,” says Cleveland FES Center investigator A. Bolu Ajiboye, PhD., associate professor of biomedical engineering at Case Western Reserve and a Cleveland FES Center research scientist at the Louis Stokes Cleveland VA Medical Center, in a statement.

The film also tells the story of a former Canadian government IT officer who undergoes a novel bionic eye implantation to regain sight and a former artist with degenerative Parkinson's.

“Somebody has to do research or no breakthroughs are going to happen,” says Kochevar. “And even if I don’t get any benefit out of this, eventually someone’s going to benefit from what I’m doing. That makes you feel special.”

Kochevar died in December 2017, just a few months after the research was published in The Lancet and featured by the BBC, CBS News and NPR.

“Bill Kochevar taught us a lot about what is possible when technology is used to communicate directly with the nervous system,” says neurosurgeon Jonathan Miller, MD, director of Functional Neurosurgery at University Hospitals, associate director of clinical affairs at the Cleveland FES Center, and professor of neurological surgery at Case Western Reserve School of Medicine. “We are now planning to expand on that knowledge in ways that could revolutionize function for people living with neurological deficits.”

“The technology step forward is significant,” says Robert Kirsch, executive director of the Cleveland FES Center and chair of Case Western Reserve University’s department of biomedical engineering. “Our intention is to have the FES performance jump by possibly 100 times. There's also going to be a major expansion of both the movement-related brain recordings and an additional sensory component.

The film premiered to wide acclaim at the 2019 Tribeca Film Festival.

For the Jan. 30 screening, there will be a red-carpet reception at 5:15 p.m. in the Hanna Theatre lobby at Playhouse Square. A panel discussion with Southern, Gaby, and Cleveland FES Center researchers A. Bolu Ajiboye, PhD., Robert F. Kirsch, PhD., Jonathan Miller, MD, and Dustin Tyler, PhD. will follow the 6 p.m. screening.

The evening will conclude with a VIP meet-and-greet with the filmmakers, panelists, researchers, public officials and other guests.

General admission tickets are $25 and $15 for students. VIP tickets, which include the pre- and post-film receptions, are available for $60. Proceeds from the evening support the Cleveland FES Center.

Film I Am Human Hanna Theatre