After years of largely unrecognized advocacy, members of the Hudson nondenominational megachurch Christ Community Chapel (CCC) finally forced their church's leaders to reckon with their complicity in a child sexual abuse scandal at the Sankey Samaritan orphanage in the Philippines.

An internal review commissioned by CCC and completed this summer, days after the publication of an extensive Scene investigation, found that abuse likely occurred at the children's home and that CCC Pastor Tom Randall had been lying to church leaders for years.

CCC asked Randall to tender his resignation this summer after they allegedly discovered an email he'd written under a different name to corroborate his version of the Sankey story. (Scene has questioned the accuracy of the church's timeline, among other things.)

The advocates felt that while the internal review was a step in the right direction, it was woefully incomplete. It was also hardly independent, in their view, as it was conducted by a church member named Suzanne Lewis-Johnson who runs a ministry that CCC generously funds.

In the aftermath of the review, advocates are being asked to sign non-disclosure agreements (NDAs) to facilitate what CCC leadership hopes will be safe and open conciliatory talks hosted by a third-party mediator. In an email on Jan. 10, CCC leaders characterized the NDAs as "standard practice" for the Christian conciliation company they'd hired. NDAs are "designed to make the discussion room safe for all involved," the email read, "and to allow all to speak their minds knowing that what is shared in the room is confidential."

The advocates are refusing to sign. They feel that church leadership hasn't honestly and thoroughly investigated its role in the abuse scandal and the massive expenditures that Tom Randall funneled to the abusers for their legal defense and other purposes.

In a statement provided to Scene, the Justice for Sankey advocates said they believed CCC leadership wished to conceal the truth of their mishandling of the Sankey scandal to their members and the public, and that an NDA would only benefit them.

"Because we believe that this issue needs to be transparent before the public, we are unanimously opposed to signing any NDA as a precondition to discussions with CCC leadership regarding Sankey," the statement read. "It is evident that [CCC leaders] are ready to wash their hands of Sankey going into 2020, even though the Advocates feel that the situation is far from resolved. Therefore, we will be continuing our advocacy and call for CCC leadership to commission an independent investigation into their response to Sankey in 2020."

In the Jan. 10 email to church members, CCC's elders — equivalent to its board of directors — provided updates on steps they had taken in the aftermath of the internal review. For one, CCC had made contact with the orphans in the Philippines, many of whom are now young adults, and had begun to "understand the complexities of the situation" as they determine the best ways to "offer support and healing to those involved."

The church also said that it had completed an assessment of its internal policies and procedures and had partnered with the Child Safety and Protection Network and is now asking each of its ministry partners to provide a Child Protection Policy. Furthermore, the email said that members of CCC's leadership team would be attending a conference in October designed to help churches recognize and confront abuse.

But advocates have lingering questions about updates regarding the finances from Tom Randall's nonprofit World Harvest Ministries, which was folded into CCC in 2014 with just under $3 million in assets. 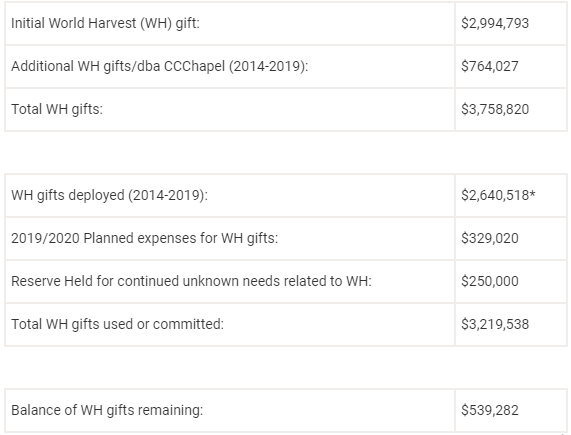 Of those initial funds and additional donations, CCC "deployed" more than $2.6 million — the figure marked with an asterisk in the table above. Included in that figure are renovations to CCC's Aurora campus ($918,667), and renovations at the Block student ministry building ($400,000). The rest of the money went to the Philippines, including direct wire transfers from Tom Randall to the abusers at Sankey, and to other "projects initiated by Tom in the USA and abroad," per the email.

The advocates are calling for a rigorous accounting of those dollars, along with an itemized list of the $329,000 in "planned expenses."

Another concerning element for the advocates is the remaining balance. CCC elders elected in December to split the remaining $539,282 between two ministries "that we all know and love": Restore Addiction Recovery and RAHAB Ministries. RAHAB is the organization founded by Suzanne Lewis-Johnson, who conducted CCC's "internal review."

The Jan. 10 email said that RAHAB "will be using the funds to expand care opportunities in their facility called Rebecca’s Place, which is designed to support girls between 12-17 years old who have been abused in the sex trafficking industry."

The advocates note that this large donation to RAHAB — which one former CCC member referred to not as a sex trafficking ministry but as an anti-abortion ministry — is in addition to $78,000 that CCC already donated in 2019.

"This further calls into question the impartiality of [Suzanne Lewis-Johnson's] review," the advocates said, "especially with regards to her assessment of the response of CCC leadership to concerns regarding Sankey raised by Advocates and members between 2014-2019."