Here's Ideastream's Full Community Conversation On the West Side Market With Darnell Brown, Kerry McCormack, Vendors and Others 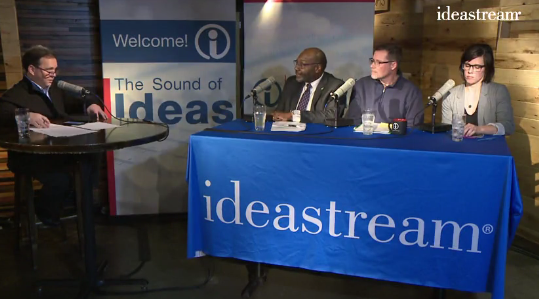 It was standing room only last night at Market Garden for Ideastream's community forum on the status and future of the West Side Market. Even those who arrived merely ten minutes after doors first opened at 5:30 were turned away, some heading to Nano Brew to watch a live stream of the events.

With guests including the city's Chief Operating Officer Darnell Brown, city councilman Kerry McCormack, various vendors and chef Rocco Whalen, who has recently thrown his name in the ring as someone who could take over management of the Cleveland landmark from the city, the conversation touched on themes familiar to anyone who's listened to the complaints of vendors and patrons over the past few years.


Brown, the city's representative who was basically a lamb sent to slaughter, according to one attendee, didn't fair too well. That shouldn't have been surprising, both because the near-unanimous sentiment is that the city has failed as a manager of the market and because that sentiment is backed up by years of experiences by the vendors, both current and former, who suffered under the city's hand.

“I think pretty much everyone in the room is in agreement that the city is not capable of running this place anymore and the only people who probably disagree are the people who work for the city,” Amanda Czuchraj said.

When Brown, a city employee, in fact disagreed, he was met with a chorus of boos.

Some suggested the Metroparks take over management, some suggested a non-profit model, Whalen suggested himself. Many of these ideas have been floated, by Alan Glazen, stakeholders in Ohio City, and others in well-publicized coverage in 2019. McCormack had asked Mayor Jackson to study a transition. He was given a firm no.

As Ideastream recapped, Brown downplayed the talk: "In terms of concrete plans, Brown said he works 60-hour weeks and he’s available, but 'my phone hasn’t rung. I haven’t seen a piece of paper.'"

The city in December announced an ambitious list of goals for the market in the coming years, including online ordering and concierge pickup, increased marketing and analysis of underused areas.

Were the city not so completely and laughably inept so far, the promises would represent an invigorating starting point for the conversation on the market's next 100 years. Instead, the list further illustrated how out of touch the city is with the operations of the market and a willful blind eye to its inability to fix it.