A Canton Native, Rapper Trippie Redd Comes to the Agora on Feb. 15 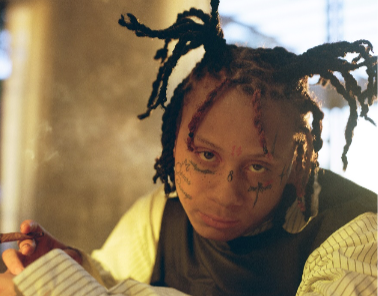 The 20-year-old alternative rapper will bring his emotional style of music to the Agora for a post Valentine’s Day show on Saturday, February 15.

The rap game is more cut-throat than ever, so how did a kid from Canton go from “living in a basement with roaches recording music” to collaborating with someone like hip-hop superstar Travis Scott?

Well, Redd has built a career based on observation. Leaving Ohio for Atlanta, he then moved to L.A. and quietly sat back and watching what worked for artists and influencers and what did not.

“That’s what smart people do,” says Redd with a chuckle. “I just was trying to get my music out there. But I did it ultimately 'cause I got to be around a lot of famous people living in Atlanta, and I just played my role. I stayed humble. I wasn’t a fan boy. I just watched and learned.”

With all the angst of a pop punk album, all the smoothness of an R&B record and all the static of a trap-rap record, Redd’s most recent full-length, A Love Letter to You 4, debuted at No. 1 on the Billboard 200. Redd’s favorite track on the record is “Lovesick.”

“Shit, I heard that crazy ass beat, and I was like, ‘Damn, that shit’s amazing,’" he says. "And when I got in the booth, I started kinda like mumbling some shit. But when I start mumbling, I put words in it cause like my mouth’s on fire. Then, I ended up turning it into what it is. Put the fireworks at the end of the song. Hit a few high notes. I just loved growing up listening to R&B tracks. I would try to singalong. It ultimately sounded not good. But then I learned how to sing in the shower. Next thing you know — ‘Lovesick.’”

Redd dubs this achievement “a stepping stone to the next.” The 20-year-old’s first No. 1 album atop the Billboard 200 came on the heels of four other top ten albums in just two years. At a time when singles, mixtapes and EPs rule the business and most major artists take a couple of years between albums, that’s a rare feat.

“There’s a mainstream part of music, and then there’s a Trippie Redd part of music,” says Redd. “My fans want music. I don’t want to starve my fans forever. And I don’t think there’s a hype for that with me with music. I think my thing is more so putting it out. I mean, different strokes for different folks, but I just feel like the more content the better.”

Redd is constantly looking to the next project rather than basking in his present glory. He listens obsessively to his unreleased music before putting it out. Once an album is in his fans’ hands, he moves on to listening to his newest demos, starting the cycle over immediately.

One of the projects currently on his mind is his feature on the upcoming Travis Barker-produced Machine Gun Kelly album, Tickets to My Downfall. The record is Shaker Heights native MGK’s first stab at a full pop-punk album.

“That’s like some super uplift Ohio,” says Redd. “We’re real good friends. I’m on his rock album, and he’s on mine. We be with each other all the time. He lives in L.A. like literally down the street from me.”

Another neighbor and close friend of Redd’s, Juice Wrld, passed away in December of last year.

“It’s sad to see artists dying, but it’s more personal to me when it gets to like Juice Wrld and X [XXTentacion]. Those type of people. Cause like we didn’t have too many records out. We were friends more than anything,” he says. “So, like now that they’re gone there’s nobody left really in my type of class. You could say [Lil] Uzi, but Uzi was like a class up cause he was with everybody else. Like 21 Savage and Kodak [Black] and all of them. When it comes to like the grungy, not giving a fuck, colored dreads, face tats, that was more so me, Juice and X. There weren’t really too many other people.”

Since Lil Uzi came up before Redd, he implemented his watch-and-learn tactic when he opened for him at Skully’s Music Diner in Columbus in 2018. The show stands out in Redd’s mind. Once he saw that kind of stage presence, he knew he wanted it.

“It was amazing. It was turnt up. I liked his energy. He was doing that shit. I don’t know how to explain it. And now it’s kinda like the wave on the internet is to preform how Uzi was preforming. But I think Uzi started that,” he says. “All those videos of people jumping in the crowd and shit — that started with Uzi.”

On tour, Trippie derives his joy from comparing each city in his head, seeing who goes the craziest. But some songs translate to all audiences.

“The most legendary performance song from Trippie Redd is ‘Dark Knight Dummo.’ The energy has always been the craziest for that song,” says Redd. “’Dark Knight Dummo’ is definitely the big dog.”

As for musical inspiration, Redd turns to Lil Wayne. When his brother passed away in 2014, Wayne was the soundtrack that kept him going.

“I listened to Wayne like it was going to church every Sunday,” says Redd. “And the reason why he influences my sound is he has a rule where he speaks straight. No pen no pad. Freestyling on the mic. Auto tune, melodies, metaphors — he’s kinda like the bread and butter to what I do.”

Looking to the future, Redd says all he wants to do is “elevate.” And cut a track with Rhianna.