Fast-Paced 'On Clover Road' at None Too Fragile Features Cults and Daring Rescues, and That's Just in the First Act 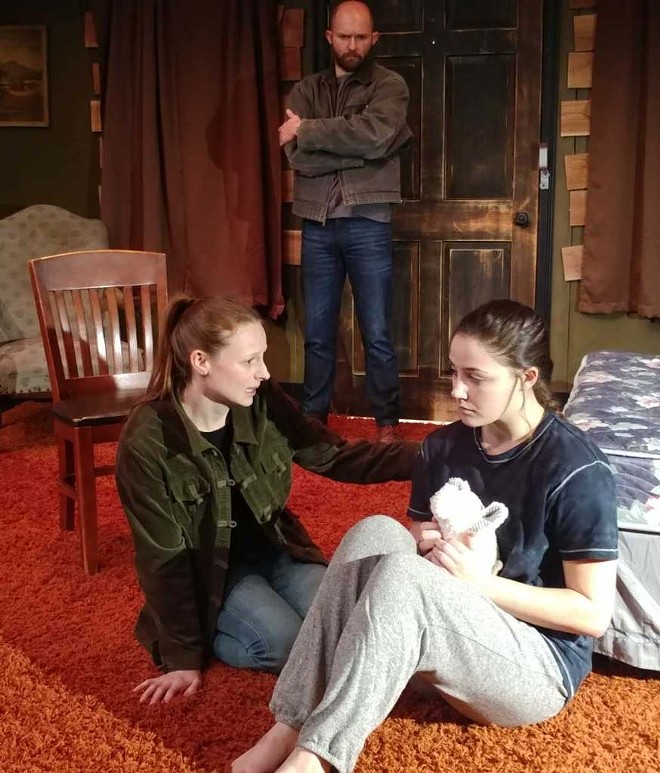 "It grabs you by the throat in the first line and doesn't let go." We've all heard someone say that about a book, a movie or play. And sometimes, it's even true.

Well, it's true in this case. The play is On Clover Road, and don't be misled by the bland title. This work by playwright Steven Dietz doesn't waste a second or a breath as it plunges the audience into a world of surprises that all occur in a seedy room in an apparently abandoned motel.

That's where we encounter Katherine (Rachel Lee Kolis), who has been taken here by the rough-edged deprogrammer Stine (James Rankin). In a trice, we learn that they are there to stage an abduction of Katherine's teenage daughter Angela who was absorbed four years earlier into a cult called "The Farm" run by "The Prophet."

Yet, just when you're ready to settle into a familiar Lifetime Channel yarn about cult brainwashing and a brave rescue, the characters flip, the plot races off in another direction, and you start to grip the arms of your seat. Or are those the arms of the people sitting next to you?

Could be, since the seats in the old Coach House Theater, where the None Too Fragile theater company now performs, are jammed together and plenty cozy. But that's okay when you're in the capable hands of director Sean Derry and an outstanding cast that doesn't miss a beat or a moment.

In the role of Katherine, Kolis exhibits every conflicted emotion you might expect for a mother who has been desperately seeking her daughter for that long. Mixing cynicism with hope and yearning, Kolis is a ripe bundle of contradictions and the perfect centerpiece for this strenuous piece.

As Stine, Rankin matches Kolis's intensity from 180 degrees away, proudly claiming he's a jackass and confronting his client with hard truths. He tells her that having her daughter back might be harder than having her here because "Children are glass, not rubber. They don't bounce back, they shatter."

Once Angela (Sarah Blubaugh) appears, she is hostile and pissed off, as expected. But don't get too comfortable with those expectations, because Dietz has a stack of character switchbacks in store.

In the second act, the pressure doesn't relent as The Prophet (real name Harris McClain) shows up. Abraham McNeil Adams makes the most of this smarmy character, showing how far Harris is willing to go in destroying the lives that have been given to him by his followers.

It's a sign of the times that cult leaders have become a cliché, due to the outsize real personages such as Jim Jones, David Koresh, Keith Raniere, and their ilk. But in Harris, Dietz cleverly puts together a different sort of scuzz bucket and Adams is equal to the nasty task.

There is a fifth character, played by Lauren Kolezar, but you won't find out who that is unless you're lucky enough to nab a ticket for the few remaining performances.