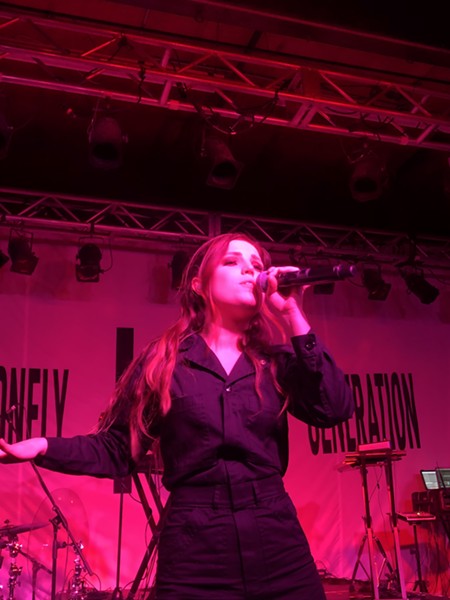 Lead singer Sydney Sierota has a stage presence that only a lifetime of practice combined with a natural aptitude could produce.

Sierota’s vocals were unwavering throughout the 90-minute set. Her vocal range and strength were showcased in full-band jams like “Diamonds” and a cover of Dua Lipa’s “Don’t Start Now” as well as softer, stripped-down moments.

During the upbeat songs, lights flashed different colors for different moods and beach balls floated around the crowd. Sierota raised a finger to pop them and each one let out rainbow confetti.

Sierota also managed to command the crowd with her solo acoustic rendition of “Follow You.” Sierra wrote the ballad from the band’s sophomore album, Lonely Generation, for her first dance at her wedding.

On a more lively note, “Scared To Be Alone” was a high point. The haunting riffs and confessional lyrics about young people’s compulsive need for distractions every second of the day gave the crowd chills.

Intimacy was the common thread that held the show together.

“There are songs on the album that talk about things I haven’t even told my friends about,” Sierota confided.

At one point, Sierota brought her mother onstage and had the crowd sing happy birthday to the 46-year-old. At another, the band’s father/producer joined them onstage for an emotional rendition of “Everyone Cries” featuring a vocal solo from bassist Noah Sierota.

Towards the end of the set, Sierota paused to introduce both of her brothers and the band’s touring guitarist, egging on a solo from each of them.

Sierota used electric guitars and keyboards sparingly throughout the set. Her most useful instrument appeared to be her signature parasol which she twirled around, pausing to pose strategically for cell phone cameras.

The family act closed with the title track from its sophomore album and, of course, “Cool Kids.”

The crowd already knew the words to “Lonely Generation” which finds 22-year-old Sierota struggling to see the good in the isolating social-media age to which she has belonged for half her life.

Sierota closed the set by hugging every fan that she could reach from the stage and thanking them individually for coming to see her and her brothers play.