On the final EP release of Kendall Street's Company's 2018 three-part record, RemoteVision, we're treated to a quirky opening track that evinces the best parts of this band at once: the self-effacing humor, the in-jokes, the jazzy song structures, the borderline prog-rock bridges, the head-bobbing bass thumps. It's all there. The song's called “Laura, I'm Sorry About the Cobbler.”

It's kind of a long story. But it's important.

Ben “Peaches” Laderberg, lead guitar and vocals in the band, is driving the van as Kendall Street Company tears across Louisiana to start their winter tour with CBDB. (They'll be at Beachland Tavern March 12.) The guys pass him the phone so that he can get a few words into this interview with the jam band reporter up in Cleveland, and he really gets into it. “Let's just do a little stream-of-consciousness thing,” he says. “I'm driving the chariot right now with the peanut gallery in the back. I love my job, for the most part.”

Then he starts telling me that “Laura, I'm Sorry About the Cobbler” comes out of a misunderstanding between him and his girlfriend, Laura. After a Kendall gig at a cidery, Laderberg filled up a spare pillowcase with a whole bunch of apples. Back home, he suggested his girlfriend might want to make a nice cobbler with his haul. She asked him to pick up a cobbler pan, and “that didn't really pan out, ha ha ha.” An argument ensued over the cobbler, although, as you can imagine, the argument was actually about broader communication dynamics and not just the cobbler.

The band took this moment and wrote a song. It's become a crowd favorite, enough so that people across the country now bring fresh cobblers to Kendall Street Company shows. This is one way of knowing that you're building a culture in music. You're building something lasting when the audience leans into a heartfelt gag like that.

That the band could pull a catchy tune out of an innocuous mishap tells you a lot about the crew we're working with here. Onstage, we've got Louis Smith (rhythm guitar, lead vocals), Brian Roy (bass, vocals), Ryan Wood (drums, percussion), Jake Vanaman (sax, woodwinds) and Laderberg shredding on the lead guitar. They seem from the outside like five guys gathered together almost at random, given instruments and told to "make it sound funky and fun." But that's the basis of most good friendships in this world, right?

Kendall Street Company lands in the scene by way of Charlottesville, Va., where the musicians matriculated at the University of Virginia. There, in the brick-terraced neighborhoods of noble, old-town America, they honed their chops at house parties and late-night bar gigs. 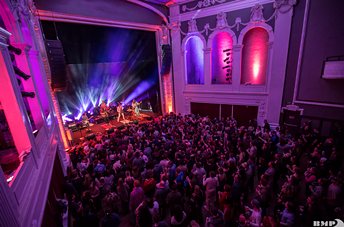 “There are always a lot of turning points in the formative years and throughout your career in music,” Roy says. “There are a lot of different points at which you sit back and say, 'Wow' or you look forward thinking, 'This is what I'm going to do.'” He mentioned an early show that saw the band performing for around four hours, one of those marathon gigs that really demonstrated to the guys what they were capable of. The obvious questions were arising as some of the older musicians were preparing to graduate: Should we continue with this? Where's this going?

The music guided their decision. You can hear this on the band's first album, Earth Turns, a fine collection of funky riffs and chemistry that foreshadows a lot of the music they'd be making together in subsequent outings. Local shows became regional tours, which soon saw the band listed on heavyweight festival bills, like their 2017 debut Lockn performance.

“That was a big moment,” Vanaman says. “I had never been to a music festival until we performed at Lockn. So, that was my first experience at one. It was eye-opening in all the best ways possible.”


And it was a statement to themselves and to their audience. As they hung around the festival grounds, congratulating Bob Weir on a great set, passing by Keller Williams backstage, their earlier inclinations to stick with their musical commitment seemed more and more like the right decision. Laderberg played cornhole with the guys from Umphrey's McGee, which also underscored how real this had become. You don't just show up on the Lockn bill without a track record of good music and a fun-loving audience. The band took it all in, savoring their path on the road as professional musicians.

The following year, the band put out the three-part RemoteVision, a conceptual undertaking that showed off their funkier sides. The three parts cover various moods and themes, and each EP was built out like the rungs of a haiku—five songs, then seven songs, then five songs again. To promote the music, the band released clever haiku on their social media channels. It was all of a piece, part of another chapter in the band's history. Take “Two Legs, Two Feet,” on the first of the triptych, an angular groove that spins like a top on the airy weirdness of the band's central conceit (“My car has two legs and two feet / only when it gets enough to eat”) before landing in a head-cocked philosophical entreaty in the chorus (“Home is where I might be / Chicago or Idaho, surprise me”).

Next up: two projects that balance the band's sillier side and the more serious, indie-style songwriting that Smith has had in the works for a while. He references Wilco and Yo La Tengo as influences on the latter, a record that the band is still recording. For the former, Smith says it will be called The Nautical Aquatical, a looser, groovier spin on sea creatures (“Ernie the Eel,” for instance). They recorded those tunes at a studio in Miami to really get into the oceanic vibe. Both albums are due out this year.

This is the fun side of music. It's a party, and the guys in Kendall Street Company keep that truth front of mind each time they hit the stage. All smiles, big hearts. Plenty of cobbler.