Cleveland, Get Ready for a Dennis! Kucinich 2021 Mayoral Run 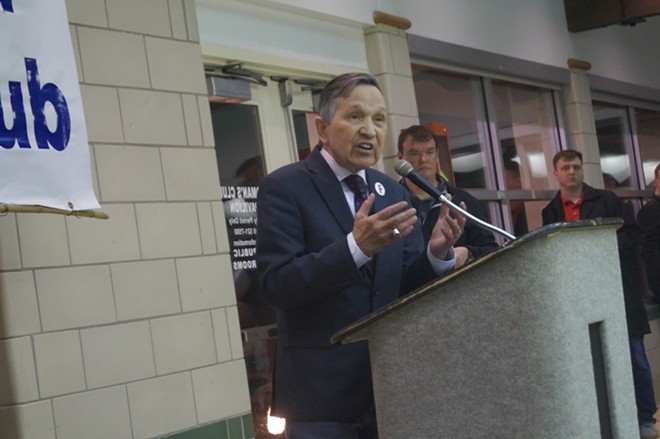 Cat's out of the bag.

The PD's Brent Larkin, in a column Friday morning, reported that Dennis! Kucinich is considering running for Cleveland Mayor in 2021. Larkin spoke with multiple people "familiar with Kucinich's thinking" who all said that Kucinich intends to run.

Kucinich did not respond to Larkin's requests for comment, but did send an email to friends and contributors in late February after the publication of a Rolling Stone article by Matt Taibbi which called him "years ahead of his time." The tone of the email suggested Kucinich, who most recently was defeated by Richard Cordray in Ohio's 2018 gubernatorial primary, wouldn't be shy about reentering the fray.

“It is imperative that at this time we rejoin our discussion, with fresh insights of our most recent experience as we endeavor to lift up our nation," he wrote. "I’m back."

Scene has been hearing rumors of a potential Kucinich run for weeks. Cleveland's Boy Mayor has been making regular appearances around town in recent months. Shaking hands. Bending ears. The whole deal.

When we reached out to him in early February to pick his brain, and mentioned a few of the specifics we'd heard, he said he'd be happy to discuss policies but declined to comment on the juicy stuff.

"As you might expect, I have no comment on City Hall rumors or speculation regarding elective office," he wrote in an email. "I’m simply a concerned Clevelander."

From inside City Hall, sources have predicted Kucinich's run with either annoyance, fear or something like sadistic glee. The assumption has been that Kucinich would use mismanagement at the West Side Market and Cleveland Public Power as central campaign planks. (Shrewd political instincts, as ever.)

That prediction seemed to gain merit when Kucinich wrote an opinion piece for cleveland.com Feb. 26 titled "How to Save the Iconic West Side Market," the publication of which was regarded as an unwelcome incursion in some City Council quarters.

Too little too late, Dennis. Decades of city management have failed the market. Time for structural change, not just Op-Eds. Let’s bring in an independent nonprofit management system. https://t.co/cp3WXPYlcs


Kucinich served as Cleveland's Mayor from 1977-1979 and represented Northeast Ohio in the U.S. House of Representatives for 16 years, until 2012. He ran for President of the United States twice, opposing the Iraq War and advancing a progressive agenda which was often ridiculed, but, as Taibbi noted, is now more or less mainstream in the Democratic Party.

While his mayoralty is remembered, correctly, as a tumultuous era, he represented a sustained threat to moneyed interests in town, famously preventing a sale of the Muncipal Light and Power Company (Muny Light, which became CPP) to rival CEI (now FirstEnergy). There's no use denying that bookending that narrative — the guy who saved Muny Light now wants to save CPP — makes for a killer stump speech.

Kucinich is an opportunistic and sometimes theatrical campaigner, but he has a hard core of local support and would immediately vex the campaigns of both Kevin Kelley and Marty Sweeney, presumed contenders who will need overwhelming support on the white West Side to achieve a top-two finish in the primary.

In fact, if Kucinich enters the race, the most aggravating result for those interested in the city's improvement might be Frank Jackson's decision to stay in the race, pursuing an unprecedented fifth term between naps and bouts of grandfatherly introspection. Jackson, for the record, was born four days before Kucinich in 1946.

Cleveland's deepest pockets are reportedly fed up with Jackson and his invisible brand of leadership, to say nothing of his familial dramas. One likely mayoral candidate who has not yet announced told Scene that no less than Al Ratner (one of the financiers of the dark money organization formed to re-elect Jackson in 2017), would not be supporting Jackson in 2021.

But that could change if Kucinich ran. Ratner and the most serious donors/puppeteers — Jackson's Union Club roster of accountants, attorneys and real estate developers — could once again invest heavily in him to prevent a new Kucinich ascendancy. Short of an unprecedented ground game, then, no candidate would be able to overcome Jackson's war chest, which was used in 2017 to pay for strategists and canvassers and a sea of yard signs.

That dynamic will be deflating for a number of self-evident reasons. But if that's the case, if 2021 shapes up to be a Jackson/Kucinich showdown, a number of edge candidates who are serious about fresh leadership at City Hall and improving the quality of life for the city's preponderant poor and vulnerable will have to fortify support quickly — in some cases, by consolidating — and develop a specific, urgent campaign message that speaks to all Clevelanders.