"I Promise I Would Not Come to the Mayor's House Unless I Had Good Reason" — (Some) Body Cam Footage From Frank Q. Jackson Investigation Released 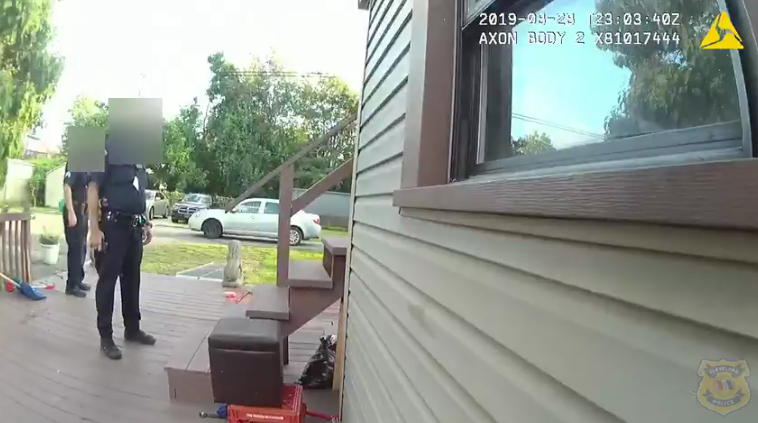 After first telling Channel 19 News that there were "no responsive records" to a request for any body camera footage from Cleveland police who responded to Mayor Frank Jackson's house in August 2019 after a car belonging to his grandson Frank Q. Jackson, who lives with Jackson, was seen leaving the scene of a murder on the near west side, the city has now delivered some body camera footage. But not all of it, it appears.

Antonio Parra was brutally killed in broad daylight in Cleveland's Clark-Fulton neighborhood last August. Two suspects drove away in a 2006 Volkswagen Passat registered to Frank Q. Jackson. That car was eventually found by police two days later, burned out on Holton Ave. with its license plates and VIN numbers removed. Sources told 19 that Frank Q. Jackson had sold the car "months ago," but he received a traffic ticket while driving the vehicle on August 9.

The body cam footage released this week doesn't tell us much, as it all ends before cops talk to anyone in the house beyond asking who is home and saying that there was a situation.

Based on reporting by Cleveland.com and local TV stations, there wasn't much of an investigation beyond that.

“Q’s at the mayor’s house right now," one officer says on the body camera footage. "He just pulled up and Gomez asked to us to detain him so we’re gonna go up to the door and try to grab him, OK?”

Mayor Jackson told them his grandson would give a statement the next day. There was no testing for gunshot residue performed. Frank Q. Jackson's truck was towed from the scene, and body cam footage shows one officer interviewing an unidentified juvenile.

But the body cam footage is important for a few lingering reasons.

Parra's mother has sued Mayor Frank Jackson and Police Chief Calvin Williams for wrongful death and obstruction of justice, with the complaint specifically identifying the interactions at Jackson's house as evidence that police, implicitly or explicitly, treated Frank Q. Jackson as above the law.

(Frank Q. pleaded guilty in early January to drastically reduced charges stemming from a violent encounter in June 2019. In that incident, he choked and punched an 18-year-old woman while in a vehicle and then beat her with a truck hitch. In the deal, the younger Jackson agreed to plead guilty to a misdemeanor assault charge. He has received a sentence of 18 months probation. Jackson managed to escape the harsher felonious assault charge and an abduction charge, for which he faced up to eight years in prison.)

As for the mayor, he has repeatedly said that he in no way influenced the investigation or prosecution of Frank Q. Jackson in that incident, which City of Cleveland prosecutors declined to pursue charges for before Cuyahoga County prosecutors indicted him, or in the murder investigation.

Still, Cleveland.com reported on the assorted "anomalies" that piled up in the murder investigation, citing experts who said it was rare for cops not to take a "prime suspect," which Cuyahoga County Prosecutor Mike O'Malley called Frank Q. Jackson, into custody in such circumstances, or to perform gunshot residue tests.

And Channel 19 had previously reported, citing sources, that Mayor Jackson asked/instructed the responding police officers to turn off their body cameras. He's denied the claim, but full footage would show whether or not that was true.

Based on what's been released so far, it's hard to imagine that full footage doesn't exist.