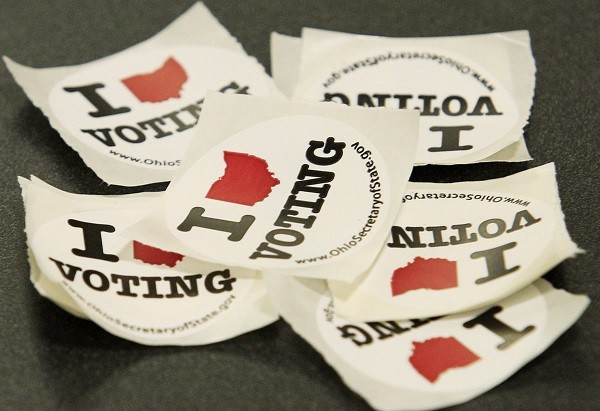 With the clock ticking, Ohio Gov. Mike DeWine and Secretary of State Frank LaRose recommended Monday that Tuesday's statewide primary elections be postponed due to the novel Coronavirus, which causes COVID-19.

It was their recommendation that all in-person voting be postponed until June 2nd and that voting by absentee ballot be extended until that date. This recommendation, they said, followed from advice they have been receiving from public health experts. They could not in good conscience, they said, tell people to stay home to preserve their health but also to perform their civic duty by voting.

"I believe when we look back on this, we'll be happy we did this," DeWine said, while acknowledging that this decision, like others he has made in response to the global pandemic, was very difficult.

This was not an official order, however. The state executive branch is not vested with the legal authority to postpone an election. And so a lawsuit will be filed and presented before the state courts later Monday afternoon.

The "lawsuit" appears to be a lawsuit in name only. Frank LaRose said that the state Attorney General, Dave Yost, who would represent the state in such a lawsuit, would not contest. Furthmore, LaRose announced that he "hoped and anticipated" the judge would agree with DeWine's recommendation. (It is technically  possible, though, the courts disagree with the lawsuit and voting will continue as previously planned.)

But the message from the state's top officials was clear: In the midst of a public health crisis of this magnitude, in which increasing numbers of public and private spaces are being shut down to prevent the spread of an extremely contagious virus, it is irresponsible to hold in-person voting. Nearly 35,000 poll workers statewide, many of whom are senior citizens, would be particularly susceptible.

"The only thing more important than free and fair elections," said LaRose, "is the health and safety of all Ohioans. That's non-negotiable."

DeWine and LaRose said that June 2 was as far out as the state could reasonably push the primaries in a presidential election year. "September would have been safer," DeWine said.

The announcement was preceded by an official order to close down fitness centers, gyms, bowling alleys, rec centers, movie theaters. indoor water parks and indoor trampoline parks. These orders follow a trend of increasingly aggressive measures to forestall the rapid spread of COVID-19. DeWine announced yesterday that all bars and restaurants in the state must be closed.

DeWine also said Monday that the state order restricting gatherings of 100 or more people would now conform with the latest CDC recommendation: no gatherings of 50 or more allowed.

The election news was accompanied by an update from Dr. Amy Acton about COVID-19 testing. Ohio now has 50 reported positive tests statewide, with 24 of them coming from Cuyahoga County.

That cluster in Northeast Ohio is likely a function of the increased private testing capacity at the Cleveland Clinic and University Hospitals. It should be assumed, as Dr. Acton has stressed, that COVID-19 has spread throughout the state. Last week, she estimated that at least 1 percent of Ohioans, more than 100,000 people, were carriers of the virus. The number of reported positive tests will continue to rise.