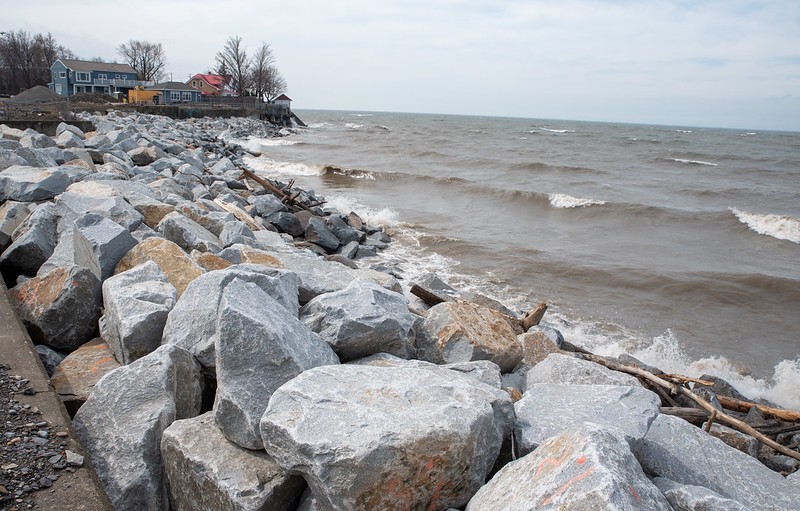 TOLEDO, Ohio — The old saying that March comes in like a lion and goes out like a lamb, certain didn't apply to Lake Erie this year.

Record high water levels in February and early March did not back down, and the month ended with Lake Erie roughly 573-feet above sea level.

That's about two to three inches higher than the record set in 1986, and one foot higher than March of 2019.

Scudder Mackey, chief of the Office of Coastal Management for the Ohio Department of Natural Resources, says shorelines in Ohio are already battered by last year's record high waters.

"Some of the existing shore protection is actually partially submerged and much less effective, and very strong winds and large waves very quickly erode the bluffs," he points out. "And in unprotected areas of the lake shore, we're seeing substantial amounts of erosion damage."

Mackey says property owners who are experiencing shoreline erosion can get some assistance through ODNR. The options include temporary permits for emergency shore protection and on-site consultations for erosion mitigation, as well as assistance grants and loans.

For the owners of commercial waterfront properties, like marinas, safety is paramount.

Jim Stouffer with the Catawba Island Club says it has posted warning signs, blocked off flooded areas and made adjustments to floating and fixed docks. He explains boaters have to be well aware of rising water levels.

"If you want to be on the water, you're going to 'pay the price,' because you're going to have storms or wave action," he states. "In the winter months, ice and ice floes. Fortunately, there are a number of contractors and engineers, and people who have the expertise to help us make sure that our shoreline is protected."

Some experts predict that extreme weather patterns fueled by climate change will continue to threaten Lake Erie's shoreline in the coming years.

But Stouffer notes that water released from Lake Superior trickles into the other Great Lakes, so its management also is key.

"Once you get a couple winters of dryer conditions, once you get a winter that might be a little warmer, you don't have quite as much ice, you're going to get more evaporation," he explains. "Once Lake Superior stops the extra spillage into Lake Huron and Lake Michigan, I think we're going to start to see more of an equilibrium reached."

The U.S. Army Corps of Engineers predicts Lake Erie will remain at or above record levels for April and May.