After Being Given "Opportunity" to Cover Cleveland's Outlying Counties, 10 of Remaining 14 Plain Dealer Reporters Have Walked Instead 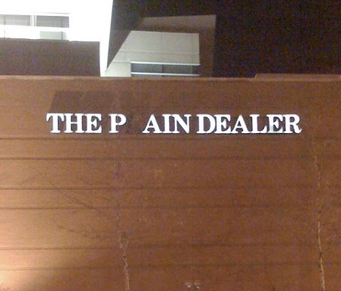 Fourteen Plain Dealer journalists were left after last Friday's massive layoffs that saw 22 staffers depart. Those who remained were subjected, on the very next business day, to the cruelest and perhaps final installment of local union-busting by Advance Publications and the Newhouse family.

They were told, with just four exceptions, that they could keep their jobs but not their beats, or even their geographic coverage area. They would be dispatched to cover the hinterlands of Cleveland, not Cleveland itself. Should they remain, they would serve as a bureau covering Cuyahoga's surrounding counties, but not Cuyahoga itself, and not so much of those counties that the news could be considered statewide in importance. That Burger King going up in Portage County? That's more the speed for DART-award winner Rachel Dissell, or for Ginger Christ, who was covering, as of this week, Cleveland's major hospital systems and the coronavirus pandemic, or Patrick O'Donnell, one of the state's best education reporters.

They and their colleagues were asked to let management — including whatever is left of the man who goes by the name of Tim Warsinskey and nominally occupies the position of PD editor-in-chief — know this week whether they would be willing to suffer those personal and professional indignities while their beats of education and real estate and more were handed off to their non-union sister newsroom at Cleveland.com, which, luckily for the readers of Northeast Ohio and of utmost concern to Advance Publications, is not likely in a financial position to hire new reporters to cover those major beats in the foreseeable future.

Today, as Warsinskey announced on behalf of the family that owns the newspaper and also recently completed a $730 million cash purchase of the Iron Man competition and brand, 10 of those 14 journalists told Advance to fuck off. Those included Dissell, Christ, O'Donnell, Gus Chan, Laura DeMarco, John Petkovic, Lisa DeJong, Michelle Jarboe, Phillip Morris, and Greg Burnett.

Four reporters remain, and they are damn good reporters and no one should begrudge their decisions. "The Guild stands with its brothers and sisters who remain: John Caniglia, Susan Glaser, Steven Litt and Terry Pluto. Subscribe, support them and read their work," the PD union said in a statement.

As for the rest of the situation, however...

In a piece announcing the news — with a headline and framing that not only doesn't mention the county-wide coverage plan but suggests these journalists volunteered in a situation that was not an impossible and humiliating choice, as if they decided to quit over the lack of free snacks in the kitchen in an entitled temper tantrum and not being exiled in a vindictive and evil move to crush the nation's first news guild — Warsinskey lied some more and wrote emptily, without shame, and in service to Advance once again, as is the habit of his columns, that the paper would still be filled with all the most important news in Northeast Ohio, remaining a vital source of information to its subscribers and readers thanks to the contributions of the "dominant digital news source in Ohio" in Cleveland.com, which has produced a "large percentage of the journalism in The Plain Dealer every day since 2013" anyway.

There are still "nearly 70" journalists covering Northeast Ohio for the company, he wrote. It's just that only six of them belong to the Plain Dealer or the union.

"It is always difficult to watch our friends and talented colleagues leave our newsroom. That was true last week and it’s true today. However, the individuals leaving today made personal decisions to voluntarily leave The Plain Dealer. I respect them and their decisions," he wrote, or at least added his byline to something that landed from Advance corporate in his email box. (Emphasis added.)

The Guild, in a statement issued this afternoon, found this and other parts of his argument as laughable and insulting as they read.

"The Plain Dealer and its out-of-state owners put dedicated and seasoned journalists in an impossible situation earlier this week in a blatant attempt to embarrass them by banning most of them from reporting on Cleveland, Cuyahoga County and the state. For many, that meant being kept from covering the topics they know best and in many cases are regarded locally and nationally as experts," the Guild said.  "If not for the Guild’s collective bargaining agreement, the union would not have been able to negotiate with the company an exit that allowed these workers to keep their earned severance and have health care during a pandemic."

Further, that "Warsinkey noted the good work at cleveland.com, a newsroom he doesn’t manage and, until recently, refused to coordinate coverage with him."

"These departures are emblematic of a larger challenge our industry is facing," Warsinskey wrote.

That part is true, just not the way he meant it.