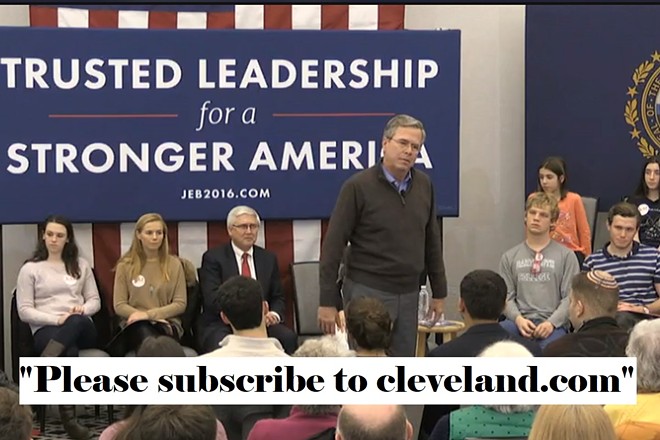 In a sad-sack letter to readers Monday morning, cleveland.com editor Chris Quinn has asked for "voluntary subscriptions" of $10 per month to sustain the news site during this, the coronavirus pandemic. He acknowledged that it was effectively a request for donations.

"This is not a paywall," he wrote. "Our coronavirus news and all of our other stories remain free. We are not cutting anyone off from the vital information needed to get through this ordeal. Your subscribing is simply an act of support for our work."

Cleveland.com, the digital non-union newsroom cleaved from The Plain Dealer in 2013, is now, functionally, the only game in town after two rounds of devastating layoffs at the paper over the past two weeks. Only four reporters on the "print side" remain.

Quinn published a column Saturday celebrating the quiet dignity of his digital staff and their enormous COVID-19 output. He railed against the perception that journalism was dying in Cleveland, though he failed to mention the crucial context of his piece: that people were mourning the death of The Plain Dealer, which had just been crushed in the fulfillment of Advance Publications' years-long union-busting scheme.

Unafflicted by these circumstances, Quinn said that the 60-plus reporters, editors and content creators in his newsroom were producing the best and most impactful journalism in town. This was a narrative he repeated Monday with hat in hand.

"We’ve put everything we’ve got at cleveland.com into meeting your information needs about COVID-19," he wrote, "into listening to you and getting your questions answered. And you have spent more time with us than ever before. You’ve sent me hundreds of notes to thank us for being there for you."

Scene has not disputed the fact that cleveland.com has produced vast quantities of COVID-19 content, much of it informative and very good. But as local lawyer-intellectual Peter Pattakos noted in a critique Sunday on Cleveland Frowns, republished by Scene Monday:

"Quinn offers little more than a broad gesture at Cleveland.com’s prolific coronavirus coverage as evidence for his claim that journalism in Cleveland is in fact thriving. Of course, if it bleeds it leads, and nothing drives pageviews like anxiety over a deadly viral pandemic. Nevermind the difference between quantity and quality, and that Cleveland.com’s pages are largely silent as to the structural inequities causing socioeconomically disadvantaged populations to be disproportionately impacted by COVID-19."

The distinction between quantity and quality becomes much less abstract when subscription dollars are on the line. Since its inception, cleveland.com has been a free site that publishes the work of both PD and cleveland.com reporters. But the digital prerogative has always been quantity, i.e., accumulating as many pageviews as possible. Quinn's borderline-erotic obsession with "numbers" is evidence of the newsroom's core drive.


Let the record show that Quinn is not atypical in this respect. For free publications, the pursuit of clicks by any means necessary is how you generate digital ad revenue from the tech overlords, (Google and Facebook and the like). It's the reason why multiple slideshows appear on clevescene.com each week, with headlines optimized for your very own search engine.

Honest editors will admit that this shit sucks, but that it's a "necessary evil" if you want to get the money to do more important stuff. Creative editors will try to make even the lowest-calorie content meaningful or fun to prevent their total soul-death. But no one pretends that this content really matters, that any reader scrolling through a ranking of every single episode of a particular TV show or a ranking of every jar of pasta sauce sold at the region's grocery stores is doing so out of a desire to be informed or entertained.

Very few people would pay for that sort of content, in other words. And as Scene noted last week, despite the strong work of a number of cleveland.com reporters, the site is known principally for its low-impact and "clickbaity" material.

The pursuit of clicks to artificially inflate audience size (and thereby increase ad revenue) is a digital descendant of the lurid, sensational coverage that is still sometimes referred to as Yellow Journalism. If it bleeds it leads, as Pattakos accurately pointed out. The purpose historically was always to boost circulation rates with ever more outrageous stories and flashier headlines ... to boost ad revenue. The larger the audience, the bigger the ad rates. When Quinn refers to the "crisis" facing the journalism industry, what he's referring to is this particular business model, in which the "product" is not the journalism itself, but the audience who consumes it, who are then packaged and sold to advertisers. This is the "traditional" journalism model, and its vulnerabilities are indeed fatally exposed when the economy tanks.

But what Quinn once again neglects to mention in his "please subscribe" column is how that model has been transmuted locally, and what the dismantling of The Plain Dealer means in context. (I, for one, am aghast at the excruciating self-discipline required to write three recent columns on this subject, including a piece at the end of March trumpeting local engagement with COVID-19 stories, and type the words "Plain Dealer" exactly zero times. Imagine!)

While it's no doubt true that cleveland.com's digital ad revenue has been amputated by COVID-19, it is also true that the site has long been subsidized by The Plain Dealer's revenue streams, including print ads and subscriptions. And if social media was any reliable indicator over the weekend, a ton of people have canceled their print subscriptions in light of what was viewed (correctly or not) as journalism's local demise. I rather doubt that these subscribers will be leapfrogging one another to donate to the site that is thought to have killed it. Nor is it likely that subscribers to cleveland.com's "subtext" accounts will be enough to compensate for the new, compounding losses.

Quinn is now in a bind of his own making. He's been in the biz long enough to know that the alternative to the traditional advertiser-based model is a subscriber-based model. But in that model, reporters must do precisely the sorts of things Quinn has been trashing PD reporters for: not just covering topics of interest in more depth and with more nuance than can be found elsewhere, or with a unique perspective; or indeed, with a unique personality or flare (as in the ravings of beloved sports columnists), but establishing followings of loyal readers — "cults," in Quinn's terminology— who like and respect their work. Quinn can talk trash about the PD's "crusaders" all he wants, but he might consider that Hollywood didn't make Oscar-winning movies about the Washington Post's Bob Woodward and Carl Bernstein, or the Boston Globe's Spotlight team, because they were quietly churning out content with their heads down.

The local journalism reckoning, sadly, is not yet over. And as the economy wreaks further havoc on cleveland.com, leading to furloughs and layoffs of their own, Quinn will have fewer and fewer numbers to fall back on.

And then what'll he have?